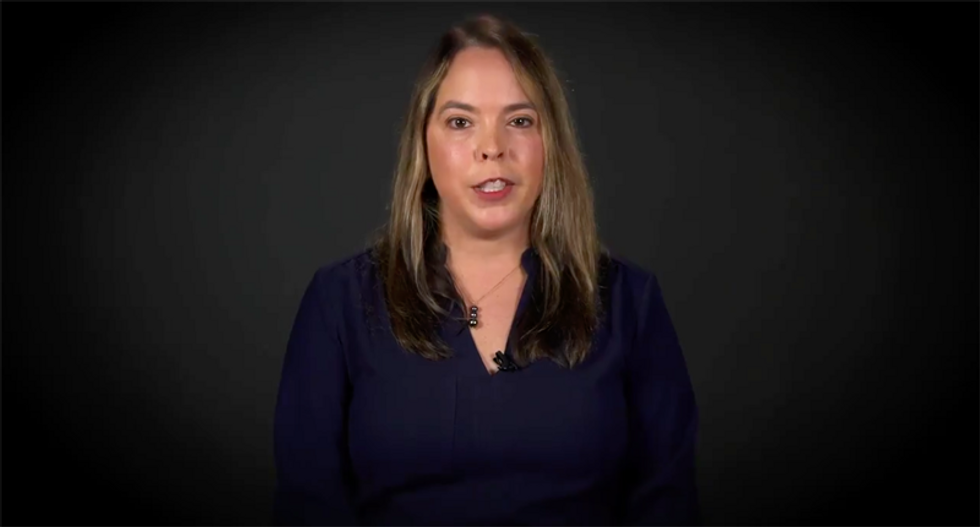 Olivia Troye in a new ad by Republican Political Alliance for Integrity and Reform (screengrab).

"President Trump’s response to the coronavirus pandemic showed a 'flat out disregard for human life' because his 'main concern was the economy and his reelection,' according to a senior adviser on the White House coronavirus task force who left the White House in August," The Washington Post reported Thursday. "Olivia Troye, who worked as homeland security, counterterrorism and coronavirus adviser to Vice President Pence for two years, said that the administration’s response cost lives and that she will vote for Democratic presidential nominee Joe Biden this fall because of her experience in the Trump White House."

"Troye is the first Trump administration official who worked extensively on the coronavirus response to forcefully speak out against Trump and his handling of the pandemic. But she joins a growing number of former officials, including former national security adviser John Bolton and former defense secretary Jim Mattis, who have detailed their worries about what happened during their time in the administration while declaring that Trump is unfit to be president," the newspaper reported.

Troye was widely praised for her stance, here's some of what people were saying:

At what other time, in what other election, have former staffers - including some who literally just left - ranging… https://t.co/qT3eoD6emf
— Maggie Haberman (@Maggie Haberman)1600375298.0

Olivia Troye’s video is damning. If Trump calls his own base “disgusting people” imagine how little regard he has f… https://t.co/itOGk3aSA6
— Beau Willimon (@Beau Willimon)1600375739.0

This despicable quote is just the tip of the iceberg in what @OliviaTroye testifies as President Trump's complete d… https://t.co/D2DR41euwK
— Tim Miller (@Tim Miller)1600373379.0

Cowardice is contagious. But so is bravery. @OliviaTroye, VP Pence’s top aide on the coronavirus task force, is the… https://t.co/zak5QgG8fq
— Sarah Longwell (@Sarah Longwell)1600373337.0

When Trump attended one meeting, Olivia Troye said, he spoke for 45 minutes about how poorly he was being treated b… https://t.co/wH3GWurgWg
— Kyle Griffin (@Kyle Griffin)1600374660.0