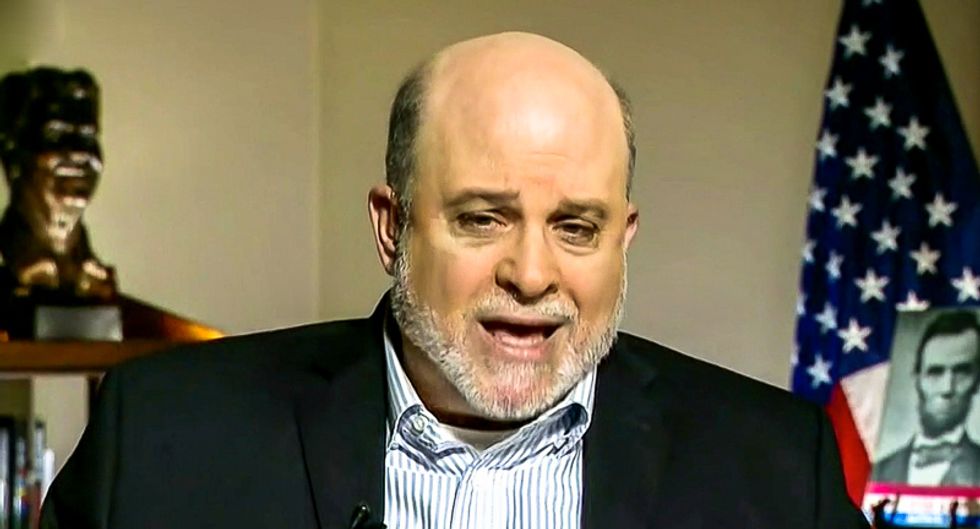 Fox News host Mark Levin melted down in an all-caps rant about some of the strategies that Democrats are considering after Republicans announced that they won’t comply with their own rule about appointing Supreme Court justices ahead of a presidential election.

Levin's first threat to Sen. Chuck Schumer (D-NY) is that if Democrats "pack the courts" then Republicans will do the same thing when they're next in power.

"NOTE TO CHUCK SCHUMER: IF YOU SHOULD WIN THE SENATE MAJORITY AND ADD SEATS TO THE SUPREME COURT, THEN WE SHALL ADD FURTHER SEATS WHEN WE RETURN TO THE MAJORITY AND PACK THEM WITH CONSTITUTIONALISTS," said Levin.

When President Barack Obama was president, Senate Majority Leader Mitch McConnell refused to allow any votes on any judicial appointees, causing serious problems with trials across the country for years. It's the reason that Trump has been able to pack the courts with his nominees. There was even a case in which McConnell created a judicial vacancy just to get his own former staffer in as a judge.

If Schumer employees his threats, it would take a very long time for Republicans to regain their power. There's a chance the party may not even exist at that point.

"IF YOU ELIMINATE THE FILIBUSTER RULE AS IT APPLIES TO LEGISLATION, THEN WE SHALL USE IT TO IMPOSE OUR WILL LEGISLATIVELY AND REVERSE YOUR LEGISLATIVE ACTIONS WHEREVER POSSIBLE WHEN WE RETURN TO THE MAJORITY," Levin also threatened.

This too presumes that Republicans would be able to regain power after Schumer makes good on his promises.

"IF YOU ADD DEMOCRAT SEATS BY ADDING DC AND PUERTO RICO TO THE SENATE, WE SHALL ADD AMERICAN SAMOA AND BREAKUP POTENTIAL OTHER STATES (LIKE TEXAS AND PERHAPS FLORIDA) AND CREATE ADDITIONAL REPUBLICAN SENATE SEATS." Levin closed.

Breaking Texas and Florida into pieces to "own the libs" isn't exactly a possibility according to Article IV, Section 3, of the Constitution. They would need Congressional approval to do so.

"New states may be admitted by the Congress into this union; but no new states shall be formed or erected within the jurisdiction of any other state; nor any state be formed by the junction of two or more states, or parts of states, without the consent of the legislatures of the states concerned as well as of the Congress," it reads.

So places like Puerto Rico, Washington, D.C. and American Samoa could be added to the union. If that's the trade, it seems fair that all of the territories become states, which would still give Democrats the advantage. It could also give the territories the reassurance that the U.S. will come to their aid in disasters.