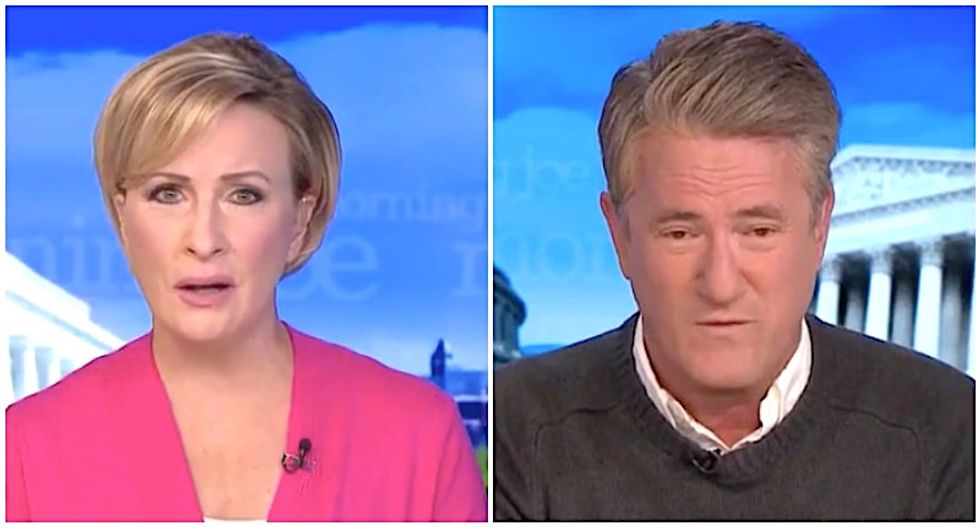 "It's remarkable that there are actually people in the Trump White House who are looking forward to the debates, because this man last night made Adm. Stockdale look like Lincoln at Gettysburg," Scarborough said. "It's very clear, even four years into the job, he doesn't understand the issues, he doesn't know the issues, and 200,000 dead Americans into the coronavirus, he's still stumbling around with no strategy, and he actually -- talk about a Freudian slip, he comes out and talks about herd mentality, then gets to herd-approved, or whatever he said."

The president conflated herd immunity with herd mentality, which he said would cause the deadly coronavirus to "disappear," and Scarborough and co-host Mika Brzezinski were astonished by his lack of understanding of the worst crisis he's faced.

"This is incredible," Brzezinski said, "because it's not that he's stupid -- he is -- but it's that he doesn't care that 2 to 3 million people may die, when he talks about herd immunity but doesn't even get the phrase right this is someone who doesn't care."

Trump insisted to moderator that the virus would just go away, and soon, although more than 1,000 are dying every day in the U.S.

"Donald Trump last night did something quite extraordinary," Scarborough said. "He admitted out loud that after 200,000 dead Americans, he has now reverted back to where the British started, where Boris Johnson's people started, talking about herd immunity, and then immediately were rushed off of that when they figured out how many dead Brits there would be Donald Trump has stumbled back onto it."

"Look at Wisconsin and you go into those numbers," he added, "and yes, law and order is very important there, but coronavirus is the key issue, and you have some older people in Wisconsin who are very concerned that Donald Trump still doesn't know what he's doing when it comes to this once-in-a-century pandemic."

Two witnesses gave differing accounts on Wednesday over whether the Pentagon delayed sending the National Guard to the United States Capitol building because it was concerned about optics.

During a Senate hearing on the January 6th Capitol riots, General of the District of Columbia National Guard William Walker testified that Army Lieutenant General Charles Flynn -- the brother of former Trump national security advisor Michael Flynn -- and Lieutenant General Walter Piatt were concerned about the optics of sending the National Guard to help defend Congress from pro-Trump rioters who had stormed the Capitol building.

Parler, the social network attracting conservatives and Donald Trump supporters, has dropped its lawsuit against Amazon for cutting off web hosting for the service.

A motion filed late Tuesday offered no reason for the dismissal and left open the possibility of refiling, but the case has become largely moot since Parler has relaunched with a new web hosting partner.

Queen Elizabeth II's husband Prince Philip was making slight progress after being admitted to hospital more than two weeks ago, his daughter-in-law said on Wednesday.

Camilla, Duchess of Cornwall, said the 99-year-old Duke of Edinburgh, who was moved to a specialist unit for heart tests on Monday, was "slightly improving".