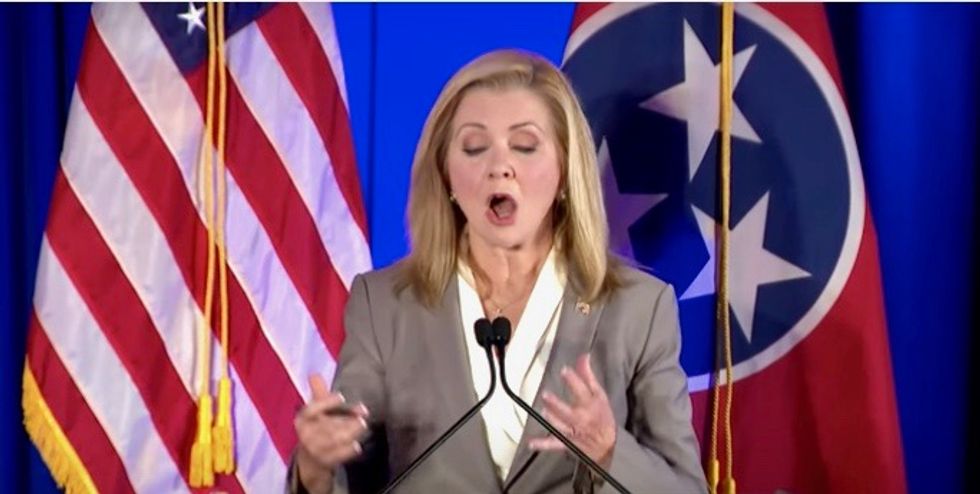 It was unclear what led to her tweet. But many were quick to defend Senator Schumer, noting he is Jewish, and calling her remarks anti-Semitic.

The paper also pointed to a tweet from white supremacist Congressman Steve King, showing the Iowa Republican with Blackburn and "members of Austria’s Freedom Party, a far-right political party founded by one-time Nazi officers 'whose leaders have continued to engage in anti-Semitism and Holocaust trivialization in recent years,' according to the Anti-Defamation League."

Senator Blackburn's Friday tweet was met with disgust and derision, accusations of anti-Semitism, and mockery for suggesting atheism was somehow a disqualifying factor for a Supreme Court nominee.

Noted journalist and political commentator David Frum, who also sits on the board of directors of the Republican Jewish Coalition, accused Blackburn of dog-whistling.

chuck schumer is paying his respects in person to the first jewish person and first woman to lie in state and your… https://t.co/nsxlZmtZWn
— darth™ (@darth™)1601048104.0

When they start using "atheist" as a synonym for "non-Christian" you know they're planning some bad shit https://t.co/erdJpgqLQU
— Arthur Chu (@Arthur Chu)1601046007.0

chuck schumer voted for justice sotomayor, who is catholic, and justice kagan, who is jewish. and you are horrible. https://t.co/iJkUqi7Gx8
— Oliver Willis (@Oliver Willis)1601044356.0

Chuck Schumer is Jewish and so was Ruth Bader Ginsberg who he just honored today, and neither are atheists, but oth… https://t.co/4tTsIHDQw3
— Yair Rosenberg (@Yair Rosenberg)1601045335.0