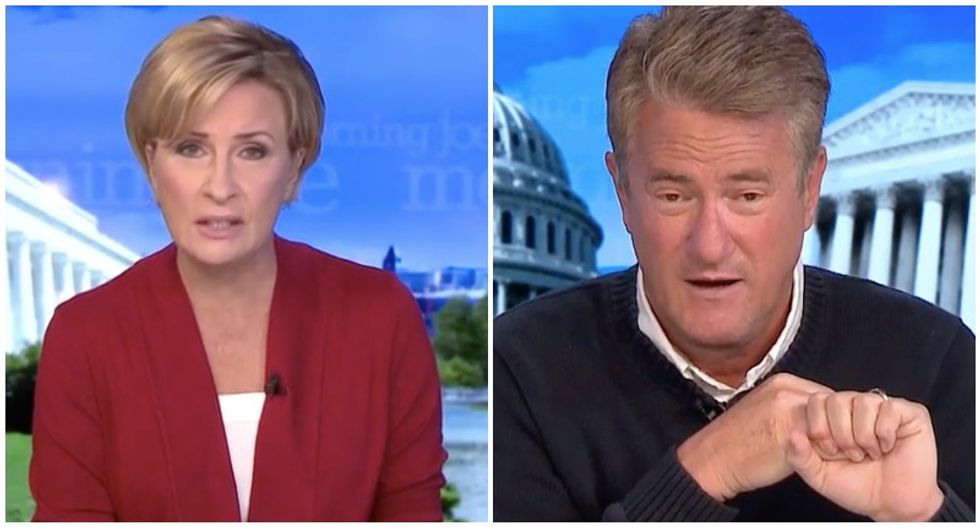 MSNBC's Joe Scarborough and Mika Brzezinski blasted President Donald Trump for ignoring dire warnings about the coronavirus and lying to the public.

The president admitted to Bob Woodward that he understood the threat posed by the virus but insisted on downplaying its potentially deadly consequences, and now nearly 200,000 have died in the U.S. and daily life remains disrupted.

"We always have this question about the Republicans standing by this president," Brzezinski said. "The moral inconsistency, maybe they did live with that on some levels, but his leadership is killing people."

Trump held an indoor campaign rally Sunday in Nevada, and MSNBC's Kasie Hunt said they were clear evidence that the president's refusal to endorse masks had undermined public health.

"All of these people in this crowd and the photos of the people who have to wear masks half have it off their face or under their nose," Hunt said. "They're deciding this isn't real, believing what the president said to them. This is why what the president said in public and what he said to Bob Woodward is astonishing. Set aside all the real ramifications for all of us stuck at home, who can't get our kids to school, can't find child care, all of that. This is a president who has demonstrated time and time again he has focused on himself."

"The question I struggle with, if he knew this at the time and he says to Bob Woodward this is dangerous we have to do something about it," Hunt added. "Joe, you have been saying over and over again, we solve the medical crisis, the economic crisis, maybe the president can get re-elected again. I had sources say this to me, too, everyone else. It boggles the mind why he wouldn't say wear masks in March."

Scarborough said the Woodward recordings proved Trump knew in January how deadly the virus could be, and how much of a threat the pandemic posed to the U.S., and the president chose not to act.

"By the time he said this was the latest Democratic hoax, his national security advisor had said, 'Mr. President, this is going to be the greatest crisis of your presidency,'" Scarborough said. "His trade representative had written him a memo that said, 'Mr. President, 500,000 souls in America could die from this.' His head of his Department of Health and Human Services had come to him and issued bleak warnings about this. He had already heard from [deputy national security adviser] Matthew Pottinger, again a China hawk, somebody who had been on the phone with Hong Kong, had been on the phone with his contacts in China and he said, is this going to be as bad as 2003, and the answer came back, no. You need to be thinking more like the Spanish flu of 1918."

"Despite having all this information, Donald Trump kept holding massive rallies, and called this a Democratic hoax, and said it was one person coming in from China, it was going to be gone," he continued, "and then said a month later it was just 15 people coming in from China and soon it would be down to zero and he told senators in March, Republican senators in March, don't worry about it, nothing to it. It's going away."

"We can go on and on, you've heard all of this before, but he said all of this knowing the truth from his own people," Scarborough added. "Not from Democrats, from the people he put in place, and any other area the man would likely be bankrupt from the lawsuits from the families of dead Americans who relied on his lies, and probably, if he had done this for a corporation, probably be put in jail."