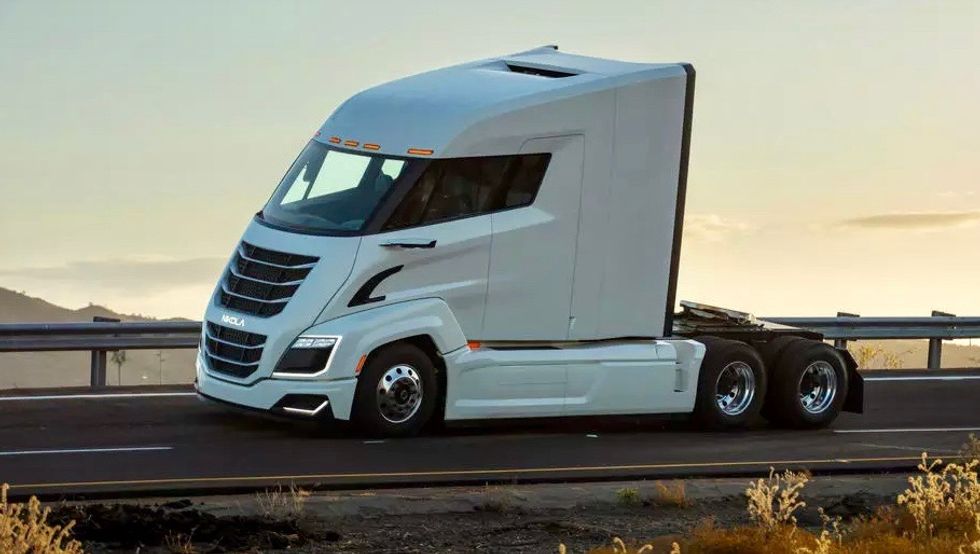 A prototype Nikola Two, one of the models being developed by the zero-emissions truck maker - Nikola Motor/AFP/File

With its electric and hydrogen-fueled trucks, the firm Nikola aims to revolutionize the future of the transportation sector. But with one investor claiming the group is running on empty, it has been having a rollercoaster ride on the stock exchange for the past week.

Founded in 2015 by Trevor Milton, the company is mainly working on the development of trucks and pick-ups powered by electric batteries or hydrogen fuel cells, as well as building out hydrogen recharging stations.

Although it has not yet built anything, it has forged strategic partnerships with several renowned industrial groups including the German engineering giant Bosch, the Italians CNH Industrial and, most recently, US car-maker General Motors.

The announcement of the latter partnership on September 8 caused shares to leap 41 percent on the New York Stock Exchange, where the group was floated in June via a merger with a company called VectoIQ, founded by a former senior executive at GM.

Like Tesla, Nikola has benefited on Wall Street from investor infatuation with electric vehicles, considered to be the future of the automobile.

But the investment company Hindenburg Research published a report on September 10 accusing the start-up of "intricate fraud" based on multiple lies by the company's founder Milton, who it said "misled partners into signing agreements by falsely claiming to have extensive proprietary technology."

That announcement triggered a plummet in share value, with stock diving 36 percent in three days.

Nikola immediately rejected the charges before issuing a more weighty statement of denial on Monday.

The group said it had been in touch with the Securities and Exchange Commission about the report, which it said was aimed at manipulating its share value, which climbed back 11 percent on Wall Street Monday.

Nikola does not however deny one of the more astounding charges leveled against it by the investment company, which was about the staging of a 2017 video showing one of its prototypes in action.

According to Hindenburg, "Nikola had the truck towed to the top of a hill on a remote stretch of road and simply filmed it rolling down the hill."

Nikola responded that it had "never stated its truck was driving under its own propulsion in the video" but had simply said that it had been "in motion."

Hindenburg shot back Monday that the company's explanation was "completely inadequate."

Before teaming up with Nikola, he said, Bosch had had its engineers study the project for several months, while GM had taken advice from the major banks and consultancies before buying its 11-percent stake in the company.

For Daniel Ives, an analyst at Wedbush, Nikola's future depends on how the group executes its strategy between now and 2023.

"If Trevor and the team can successfully build out its Arizona factory, morph prototypes into models... lay the groundwork for its charging network, and catalyze delivery trucking orders with an attractive gross margin structure then the opportunity for NKLA is massive and the stock will reflect this dynamic," he said in an advisory note Monday.

"However, clearly there is much wood to chop to get there over the next 12 to 18 months and this remains a 'prove me' stock in the eyes of investors."

Can the group become the new Tesla, the electric car company built up by Elon Musk, which is now worth more on the stock exchange than traditional carmakers even though it sells far fewer vehicles?

Probably not, said Ives. Just as Apple and Amazon dominate their respective sectors "there's one Tesla."

"But if successful in their visions, Nikola has a huge opportunity," he told AFP. "In the Electric Vehicle market, you're talking about hundreds of billions that's going to be spent over the next decade. There's going to be many winners."