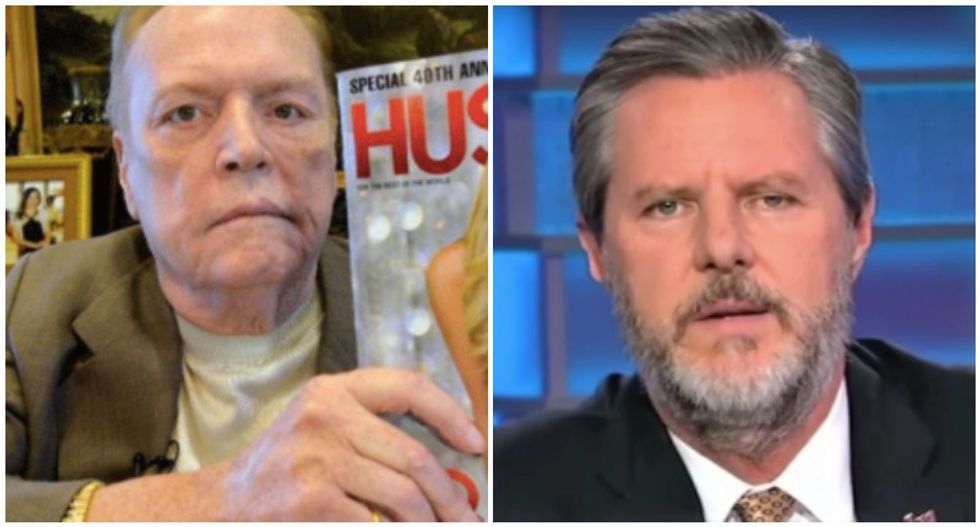 Hustler publisher Larry Flynt took a victory lap after the "huckster" son of his long-ago nemesis Jerry Falwell fell from grace amid a sex scandal.

Jerry Falwell Jr. resigned from Liberty University founded by his namesake father, who famously feuded with Flynt, and the pornographer gloated over the son's "gross hypocrisy" in a new column for The Daily Beast.

"Ironically, Falwell Sr. and I actually became friends later," Flynt wrote. "We enjoyed many cordial visits, participated in debates across the country, and even exchanged Christmas cards. I have to concede that his friendship with me proves that, for the most part, he was practicing an essential tenet of his faith, forgiveness, and was a sincere Christian."

But he lumps the son into a group of "false prophets" along with megachurch pastor Paula White, the spiritual adviser for President Donald Trump.

"They’re obsessed above all with sexual behavior, ignoring and subverting the core message of Christianity — humility and compassion for the downtrodden—while embracing 'prosperity gospel,' which is to say the gospel of greed above all other values," Flynt wrote.

Falwell Jr. was forced out of the university he led over a seven-year sexual relationship that he encouraged between his wife and a younger man the couple had befriended, but Flynt said he deserved disgrace for endorsing the "rich bastard" Trump.

"Here was a man who had violated almost every principle of the Christian faith," Flynt wrote. "He was married three times; accused of multiple extramarital affairs; repeatedly defrauded investors, contractors, and students; habitually lied; and practiced thinly disguised sexism and racism."

Flynt noted that many Liberty students and alumni protested Falwell Jr.'s embrace of Trump, and he argued that they were displaying true Christian values.

"It’s possible Jerry Falwell Jr. will find forgiveness from his flock, but even if he doesn’t, the $10 million severance payout from Liberty University will surely ease his pain," Flynt wrote.

"As for the rest of the country, I repeat the sentiment that has guided me for decades," he added. "If there were ever to be a Second Coming of Jesus Christ, I have no doubt that his first order of business would be picking up a whip and banishing forever all the hucksters and false prophets who have perverted his message."