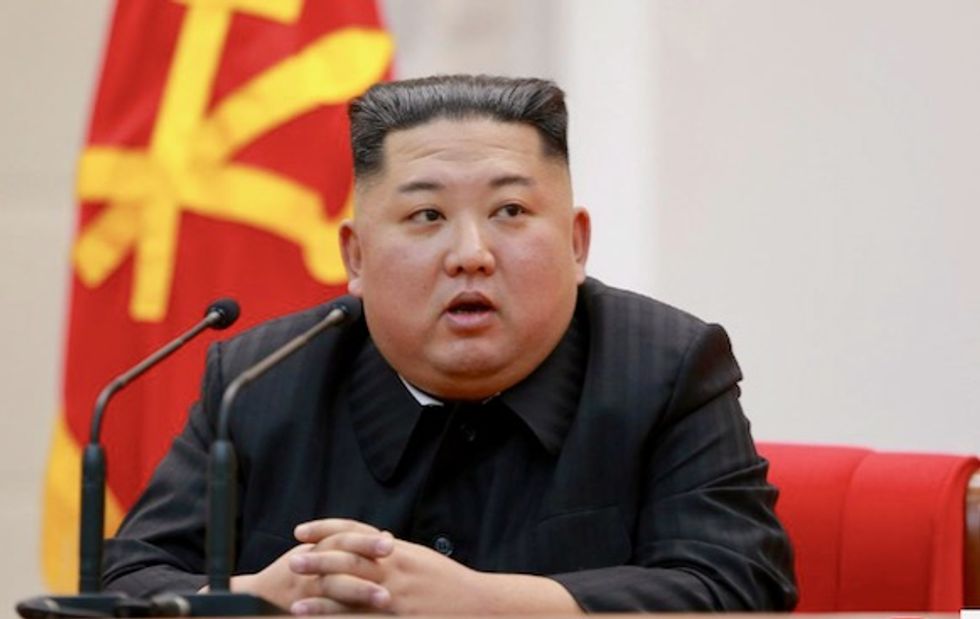 North Korean leader Kim Jong Un speaks at the Ministry of the People's Armed Forces on occasion of the 71st anniversary of the Korean People's Army (KPA) in Pyongyang, North Korea in this February 8, 2019 KCNA Photo. KCNA via REUTERS

North Korean leader Kim Jong Un issued a rare apology Friday over what he described as the "unexpected and disgraceful" killing of a South Korean at sea, Seoul's presidential office said.

Apologies from the North -- let alone attributed to Kim personally -- are extremely unusual, and the message comes with inter-Korean ties in deep freeze as well as a stand-off in nuclear negotiations between Pyongyang and Washington.

Analysts said the North was looking to placate its neighbour after the shooting -- the first time its forces killed a Southern citizen for a decade -- provoked outrage in the South.

The fisheries official was shot dead on Tuesday by North Korean soldiers, and Seoul says his body was set on fire while still in the water, apparently as a precaution against coronavirus infection.

Kim was "very sorry" for the "unexpected and disgraceful event" that had "disappointed President Moon and South Koreans", rather than helping them in the face of the "malicious coronavirus", said Suh Hoon, the South's National Security Adviser.

Suh was reading out a letter from the department of the North's ruling party responsible for relations with the South.

In it, Pyongyang acknowledged firing around 10 shots at the man, who had "illegally entered our waters" and refused to properly identify himself.

Border guards fired at him in accordance with standing instructions, it said.

There was no immediate confirmation of the contents from the North, whose state media did not mention the incident on Friday.

North Korean defector turned Seoul-based researcher Ahn Chan-il said it was "extremely rare for the North's supreme commander to offer an apology, especially to South Koreans and their President".

"I think this is the first since the 1976 Korean axe murder incident," he said, referring to the killing of two US officers in the Demilitarized Zone that divides the peninsula.

Leif-Eric Easley, a professor at Ewha University in Seoul, added: "Kim Jong Un's supposed apology reduces the risk of escalation between the two Koreas and keeps the Moon government's hopes for engagement alive."

It was a "diplomatic move" which "avoids a potential fight in the short-term and preserves the option of reaping longer-term benefits from Seoul", he said.

The killing provoked fury in the South, with President Moon Jae-in -- a consistent advocate of better relations with Pyongyang -- saying it was "shocking" and could not be tolerated for any reason.

In an editorial Friday, the Korea JoongAng Daily said it was "enraged at the North's abominable act".

"The act of murdering an unarmed man and burning his body cannot be excused in any way," it said.

The man -- who was wearing a life jacket -- disappeared from a patrol vessel near the western border island of Yeonpyeong on Monday, and North Korean forces located him in their waters more than 24 hours later.

South Korean media reports said he was in his forties with two children, but had recently divorced and had financial problems.

Seoul military officials say the man was interrogated while in the water over several hours and expressed a desire to defect, but was killed after an "order from superior authority".

The North's letter said his body was no longer visible after the shooting and troops set his flotation device -- which was covered in blood -- on fire in accordance with national emergency prevention regulations.

North Korea's crumbling health system would struggle to cope with a major virus outbreak but it has not confirmed a single case of the disease that has swept the world after taking drastic steps to prevent local coronavirus infections.

Pyongyang closed its border with China in January and state media said authorities had raised a state of emergency to the maximum level in July.

Pyongyang put the border city of Kaesong under lockdown in the same month after a defector who had fled South three years ago sneaked back over the heavily fortified border, with he could have carried the disease into the country.

US Forces Korea commander Robert Abrams said earlier this month that North Korean authorities had issued shoot-to-kill orders to prevent the coronavirus entering from China, creating a "buffer zone" at the border.