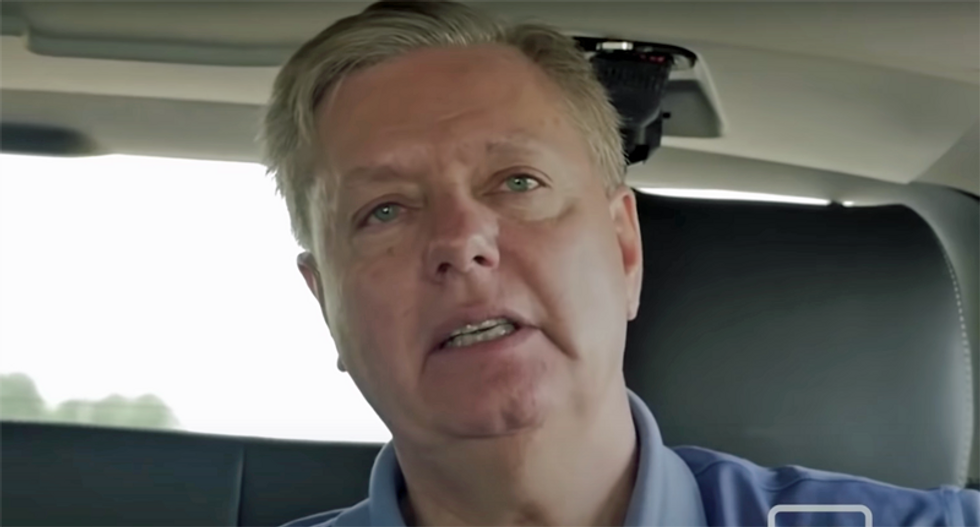 Sen. Lindsey Graham tearing up while discussing his friendship with Joe Biden (screengrab).

Sen. Lindsey Graham (R-SC) is facing a huge fundraising shortage -- despite being an incumbent Republican senator running in South Carolina.

As he's been trailing Democrat Jaime Harrison in fundraising, Graham has repeatedly gone on Fox News to beg for donations.

“My opponent will raise almost $100 million in the state of South Carolina,”  Graham complained to Fox and Friends on Thursday.

“The most money ever spent in the state on a Senate race was by me in 2014 when I spent $13 million. He raised $6 million from the time Justice Ginsburg passed away, within 72 hours and God bless Justice Ginsburg. We’re celebrating her life. I appreciate waiting ’til Saturday to announce her replacement. But I am being killed financially,” he revealed. “This money is because they hate my guts.”

Later that same day, he repeated his appeals on Sean Hannity.

Graham's fundraising woes were the focus of a new video by the Lincoln Project, the group of disgruntled former GOP strategists seeking to oust Trump and his defenders in the 2020 election.

They ad spoofs ads by the Society for the Prevention of Cruelty to Animals -- complete with the song "Angel" by Sarah McLachlan.

The ad jokingly asks for donations to save Graham from "being violently out-fundraised."