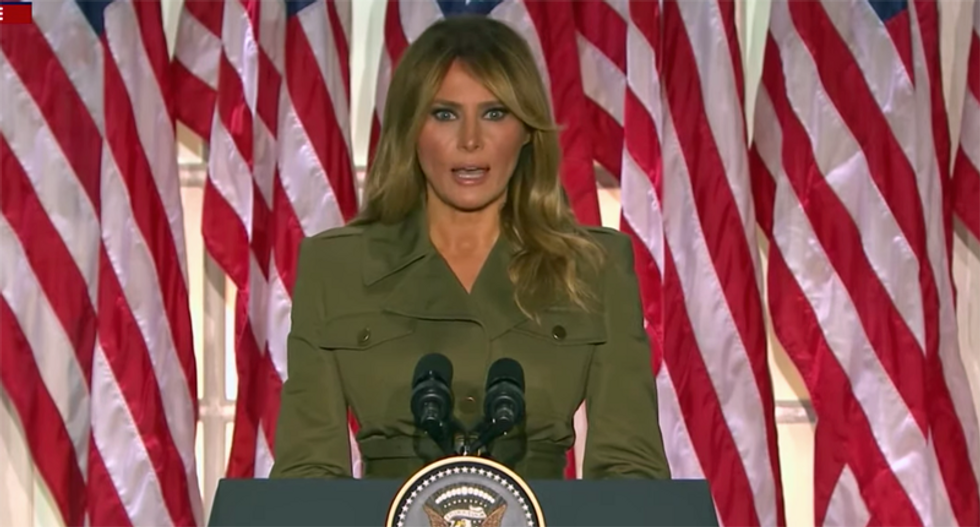 "FLOTUS signed up for her current gig not just because it pays so well, though she has confirmed her marriage’s transactional nature," wrote Holloway. "Instead, as recent books confirm, Melania was never a passive observer, helpless victim or quiet resistor to her husband’s agenda — innocence always afforded white women — but an enthusiastic and willing accomplice. In other words, this FLOTUS is more than just a trophy wife or a benign accessory; she’s a collaborator, a co-conspirator, an accessory."

Indeed, she added, "Melania’s profligate lies suggest that she knows her husband so well because they are so similar — self-interested, self-aggrandizing fabulists spreading falsehoods whenever their lips move."

As examples, Holloway noted Melania's documented history of racist Birther attacks on President Barack Obama, despite her own status as a Slovenian immigrant who earned an "Einstein visa" despite lying about graduating from college; her defenses of Brett Kavanaugh and her husband against sexual assault accusations; and her plagiarism from Michelle Obama even while being unwilling to use the same toilet she had.

"Melania has been about the role she’s proudly played in this violent white supremacist presidency," wrote Holloway. "She had stated that she encouraged her husband to run in the first place. Like her spouse, she reportedly consumes absurd amounts of cable news, looking out for non-flattering stories about the president, and complaining when “his communications and press team aren’t doing enough to defend him.” Melania reportedly holds outsized sway over White House hirings and firings, and essentially chose Mike Pence for vice president."

"She is fully on board with this whole thing — her constructions of white womanhood’s purity and innocence be damned," concluded Holloway.