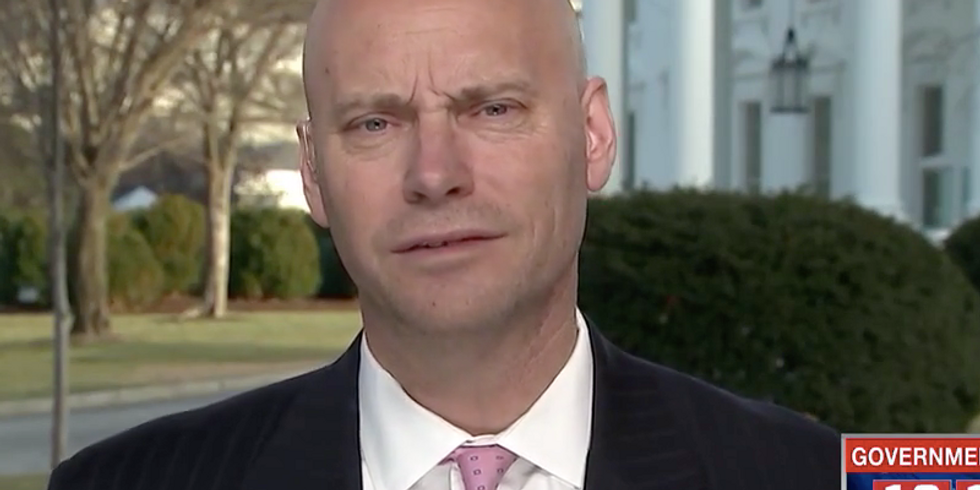 Mike Pence's chief of staff, Marc Short, belittled a former staffer who has now come out against President Donald Trump for his failed response to the coronavirus pandemic.

In an NBC News interview, Olivia Troye, who advised Pence on homeland security, counterterrorism and the coronavirus, explained that the main conversation in the White House over the coronavirus was about Trump's image, and not saving Americans.

Short belittled Troye, saying she simply couldn't handle the stresses of her job.

"It is discouraging when Olivia, who candidly I think the strain of the work was something that led us to say, she as a career employment of Department of Homeland Security, we asked her to go back to the department because we felt the strain was too much for her to do the job. And during her time she never --" Short said before MSNBC's Hallie Jackson interrupted him.

"Are you saying she was not capable of functioning in this position?" Jackson asked.

"During her time here, she never expressed any concerns," said Short. "When she left, she wrote us all and said, it has been an absolute honor working closely with all of you."

Typically when a former Trump staffer comes forward to reveal something horrible about the president, the White House moves in to attack them and destroy them and their lives and credibility. So, it isn't shocking to see Short employ this tactic.

He went on to say that Troye wasn't really a life-long Republican because she said she didn't vote for Trump in 2016. Short also dismissed Troye's claims that Trump was more excited about not shaking hands with people because they're "disgusting." Trump, a notorious and documented germaphobe, called COVID-19 a "good thing" for that reason, according to Troye.

His fear of germs was one of the reasons he said it was clear the Christopher Steele dossier was a lie, “I’m also very much of a germaphobe, by the way, believe me," Trump said just before being inaugurated in 2017. In a 1999 interview with Trump for "Later Today," Trump called shaking hands "barbaric."

"I mean, they have medical reports all the time. Shaking hands, you catch colds, you catch the flu, you catch this. You catch all sorts of things. Who knows what you don't catch?" Trump said, according to page 71 of The World According to Trump. Still, Short claimed Trump never made the remarks about people being "disgusting."