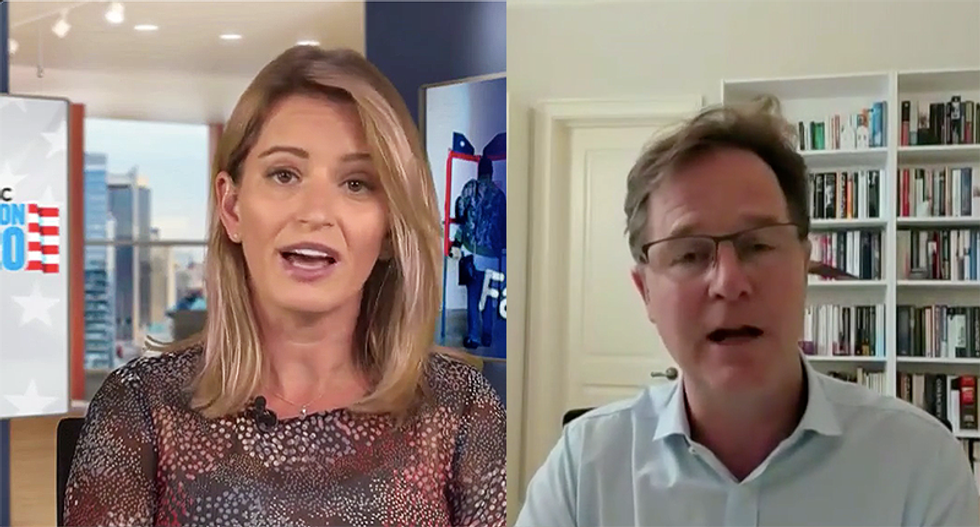 MSNBC host Katy Tur hammered Facebook Vice President Nick Clegg during an appearance about why the platform isn't doing enough to stop allowing candidates like Donald Trump to broadcast their lies across the platform.

Facebook's CEO Mark Zuckerberg announced this week that he would stop all new political ad uploads the week before the election, which likely won't have much impact given how many people are voting early this year to avoid the coronavirus.

Tur showed a series of screen captures of what she called "dangerous lies" from the president that Facebook still allows to appear on the site. In one case, they provided a disclaimer saying that one of the posts wasn't true, but the post had already spread throughout Facebook and remains active despite being false information.

Facebook had said that it would crack down on fake news, but it doesn't seem to be willing to remove the false content.

"You know your Facebook users. You know them well," said Tur. "You also know that many of them, especially the supporters of Donald Trump, don't trust media outlets, don't trust fact-checkers, don't trust other campaigns to go and correct the record. The primary source of information is social media, is Facebook. They go there and go to the president's page and take that as gospel."

She noted that simply going to Trump's page yield's a number of "dangerous and flat out wrong" things about the upcoming election.

"He says because of mail-in ballots, 2020 will be the most rigged election in our nation's history," said Tur. "It's not true and it's dangerous information about the election. He said Democrats will destroy our suburbs. Again, dangerous misinformation. 'Corrupt Joe Biden wants to defund our police.' He doesn't. He never said that. 'Corrupt Joe Biden has confirmed he would give unlimited health care to illegal immigrants.' He hasn't said that. This is dangerous misinformation, especially the top two about the mail-in ballots and the rigged election. that is contrary to what -- I'm sorry, is fact and to expect Facebook users to go to fact-checkers or to rely on the news media, I think you're asking a lot. Why not just go in and correct it yourself or not allow it on your website when it's being shared so frequently?"

Clegg said that they're doing their part by putting disclaimers under misleading posts, but Turr said it wasn't enough.

"Look, I totally accept there are always going to be people who say you should go further. You should remove everything that people question or don't like," he said.

"I'm sorry, I'm going to interrupt. It's not questioning what you don't like," said Tur. "This is stuff that is dangerous. It's dangerous to our democracy, and it is false. Adding a label is not really going to do much to somebody who doesn't believe anybody but Donald Trump when there are thousands if not millions of those voters out there who are going to your site and these pages on your site for primary information, not to mention what gets shared, not even from these political pages, these official political pages, but the content that gets shared among your users. Adding a label, again, like putting a band-aid on a gunshot wound."

Clegg said he disagreed because their evidence shows having a label is "very visible to users" and that users do respond to it.

Facebook has been criticized over the past several years of taking a hard turn to the right, giving preference to conservative groups and candidates. BuzzFeed News obtained leaked communication proving that conservatives like Diamond and Silk and Breitbart are still allowed to continue operating on the platform despite being caught in several lies that liberal groups would be removed for. According to the report, Facebook removed what they call "strikes" against a page, so that conservatives were not penalized for violations of Facebook's misinformation policies.

There were thousands of misleading Facebook ads that went up in the UK that helped lead conservatives to victory there as well.

In a February report by the Washington Post, Facebook was outed for giving preferential treatment to conservatives out of fear of being accused of playing favorites.

“We can’t remove all of it because it will disproportionately affect conservatives,” said senior Republican, Joel Kaplan, people familiar with the meeting told the Post. Essentially, because conservative groups lie so much, Facebook is scared to remove the lies because it will remove that much content from the GOP-supporting groups. That would look bad to conservatives who might then create conspiracy theories about Facebook giving preferential treatment to Democrats and liberals who are telling the truth. It sets up a scenario where the only way for Democrats to fight back is to post as much false information as conservatives do to level the playing field. Both seem contrary to the promises by the social media site.

"When another Facebook staff member pushed for the entire list to be taken down on the grounds that the accounts fueled the 'fake news' that had roiled the election, Kaplan warned of the backlash from conservatives," reported the Post.

“They don’t believe it to be fake news,” Kaplan argued, saying that it was time to have guidelines that could defend Facebook against accusations of favoring conservatives.

It's unclear if these new "revised policies" are the company's attempt to do exactly that. Either way, dangerous false information still won't be removed by the site out of fear it could hurt conservatives' feelings.