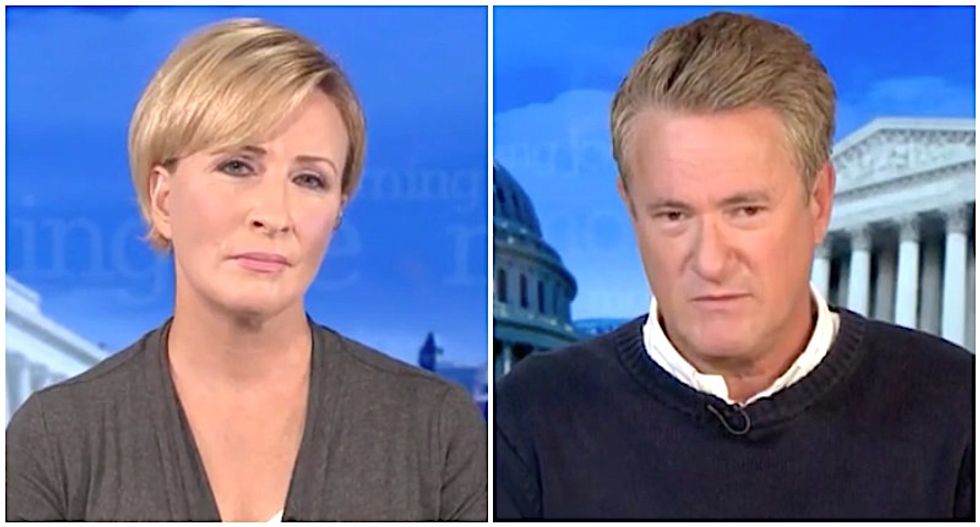 MSNBC's Joe Scarborough and Mika Brzezinski busted President Donald Trump's thirst for publicity -- which led him to blurt out damning admissions about his coronavirus response.

Legendary reporter Bob Woodward recorded the president admitting he purposefully downplayed the COVID-19 pandemic to protect the economy, and the "Morning Joe" co-hosts said they weren't a bit surprised Trump would blab about his own failures.

"There are a lot of people waking up this morning listening to the excerpts, may have heard some of them yesterday and they're wondering, why in the world would Donald Trump ever talk to Bob Woodward, and just admit all the things that he admitted, that are politically devastating?" Scarborough said. "We have known Trump for a decade, well over a decade. If you go into Donald Trump's office, it is sort of -- at least it was before he went to the White House, it seemed to be a time capsule from 1987, and he looked upon Bob Woodward [and] '60 Minutes' with great reverence, and if he was going on '60 Minutes,' then he had made it. That's the first part of this."

"The second part, of course, may surprise people, his supporters, who hear Donald Trump talk about fake news all the time, but he's talking to one of, I think, the most successful and best-known reporters in Washington, D.C., who said yesterday that this whole incident has shown that Donald Trump, far from hating the media, he's obsessed with the media," Scarborough added. "He loves the media, he reveres the media. He would love to be loved by the New York Times by Bob Woodward, and you look at the book and Donald Trump keeps fretting to Bob Woodward, 'You're not going to do a hit job, are you? You're not going to do a hit job on me, are you?' It's his own supporters that he has contempt for, he has contempt for most people, in fact, even family members. But the media he reveres."

Brzezinski said the president had sold himself out trying to impress the veteran journalist.

"We often wondered what the obsession was with us," she said. "But you hear in these tapes Donald Trump in his office in New York, surrounded by all that crap that people had given him, that he would show off, saying, 'I know this person, that person.' It's almost a run-on train of thought showing off how much he knows, talking to Woodward about how much he really knows, but not getting that Woodward is going to completely turn this around on him and reveal to the American people that the reason their lives have been devastated, the reason the economy is not serving them and they had to shut down their dry cleaning business and they had to close up their stores and they're broke and they're moving and their house is on sale and no one will buy it, the reason their life has completely collapsed, is because this president didn't actually take the information that he was using to show off to Bob Woodward and create a plan that would have very simply -- it would have been tough."