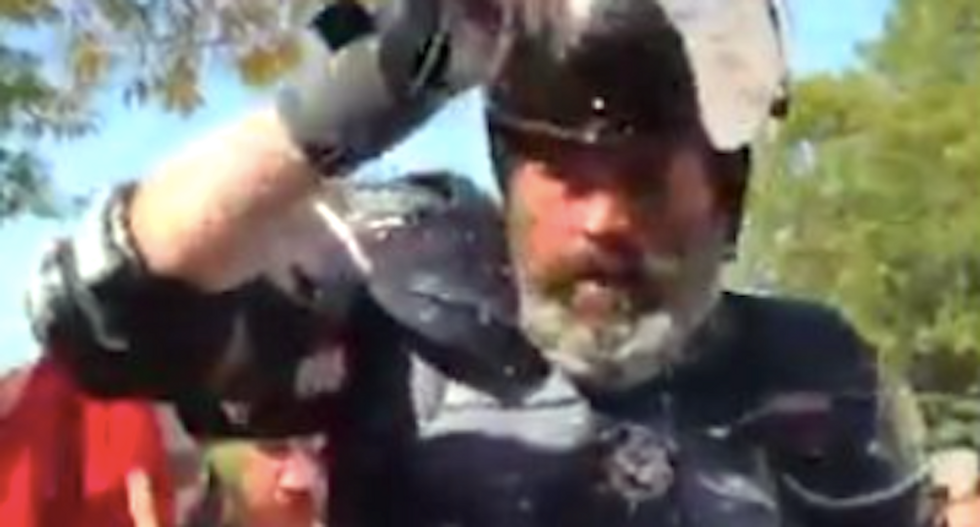 Alan Swinney was charged with multiple counts of assault, along with pointing a firearm at another, unlawful use of a weapon and unlawful use of tear gas and remains held at the Multnomah County Jail, reported Oregon Public Broadcasting.

The 50-year-old Swinney was photographed and recorded on video Aug. 22 pointing a revolver at anti-fascist protesters outside the Multnomah County Justice Center.

Other right-wing demonstrators assaulted protesters with paintball guns and baseball bats, although police have said staffing shortages kept them from intervening in the violent clash.

The 6-foot-5, 260-pound Swinney has claimed that police cleared him of wrongdoing in the violent brawls after the Proud Boys, Patriot Prayer and other right-wing groups rolled into downtown in pickups to break up demonstrations against police brutality.

He was booked into jail hours after the president excited Proud Boy members by refusing to denounce them during his debate with Joe Biden.

Why thieves are snatching French bulldogs across the US

The two thieves who brutally robbed 27-year-old Marieke Bayens at gunpoint on a California street were not after her purse -- or her. They wanted the little dog at the end of her leash: Merlyn, a French bulldog.

From New York to Los Angeles, and from Miami to Chicago, thefts of the prized breed have been on the rise.

Kira Lerner, Michigan Advance
WASHINGTON — Republican state lawmakers across the country are ramping up their drive to enact voting and election-related laws in time for crucial 2022 midterm elections.

As federal legislation that would limit state-level voting restrictions appears stymied in Washington, Republicans in the states are moving forward with new proposals and revisiting old ones that Democrats and voting rights advocates say are designed to both suppress voters and subvert the election process.

“I expect we will see additional restrictive voting legislation in 2022,” said election expert Rick Hasen, co-director of the Fair Elections and Free Speech Center at the University of California, Irvine. “Trump is demanding it based on his false claims of a stolen 2020 election, and it plays to the Republican base that believes Trump’s false claims.”