Reporter calls out Lindsey Graham for holding whites-only police union endorsement: 'What does that say?' 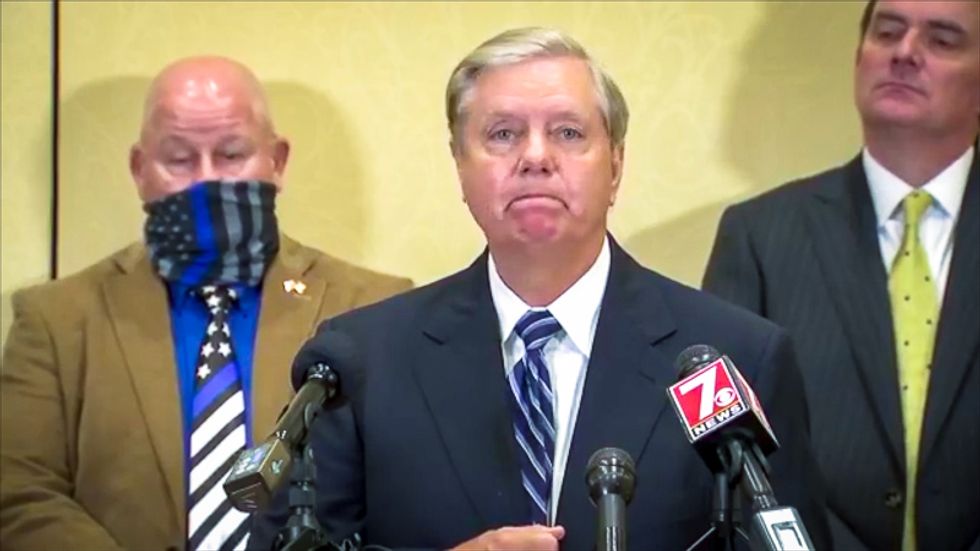 Sen. Lindsey Graham (R-SC) on Wednesday insisted that Black law enforcement officers support him even though none showed up for his endorsement by the Fraternal Order of Police.

During the endorsement event in Greenville, South Carolina, a reporter asked Graham about why there were no Black or brown faces behind him.

"You mentioned that we should see more minority police," the reporter recalled. "When was the last time you visited one of those [minority] neighborhoods in this area? And also, just looking at the landscape behind you, there's not minority sheriff's officers or people standing behind you. What does that say?"

"I would say that African-American cops are with me," Graham chuckled in response, before asking if there were any members of the Fraternal Order of Police who are Black.

"I think the hardest job in America right now is being an African-American cop," he continued. "I go to communities all over. I was in downtown Spartanburg looking at housing developments. I go all over the state, wherever we have a crisis, I am there."

"It was the white National Guard members that said to me, 'You have no idea what crap these people -- Black brothers and sisters in uniform take a lot a grief, they're called traitors.'"

"Not in South Carolina," the senator insisted. "If you're a young African-American thinking about a career in law enforcement, all of us respect you."

"Here's what I can say to your question," he told the reporter. "In South Carolina, it is not about the color of your skin or your family's origin. It is about you and your ideas. And the reason I'm going to win is because my ideas and my record are a much better fit for South Carolina."

With that, Graham ended the press conference, taking the time to thank each of the white supporters assembled behind him.