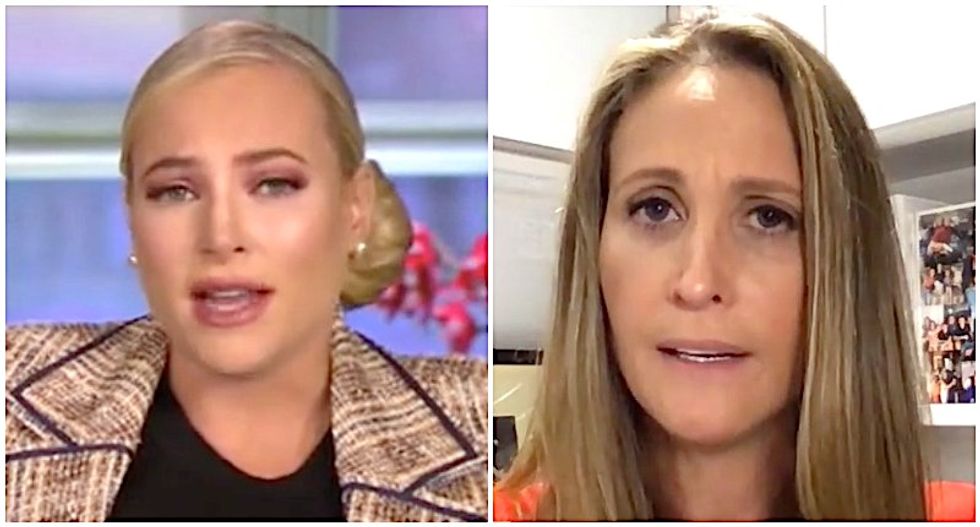 "The View" co-host Meghan McCain scolded Melania Trump's former friend for writing a tell-all book based, in part, on recordings she'd made -- but Stephanie Winston Wolkoff explained why she'd turned on the first lady.

Wolkoff appeared on the ABC News show to discuss her new book "Melania and Me," which contains revelations from recordings she made of the first lady after the White House accused her of profiting excessively from her work helping to plan the inauguration.

"You recently revealed you secretly recorded your conversations with Melania," McCain said. "I said on many occasions, I told Mary Trump, I don't like tell-all books like this. I think they're in bad taste, and generally I think secretly recording your friend and selling its contents for profit certainly ups the ante, and it's not only unethical, but just gross. A lot of people think you're out for revenge, revealing the damaging details. Can you tell me that's not true? Just on a personal level, and if someone did this to my mother, and she has a close aide who has been with her for over 20 years, it would break my family. Do you understand the implications this can have on us just as people?"

Wolkoff agreed, but said McCain had some of the facts wrong in her accusations.

"Thank you for asking that question because it's one of the most common misconceptions," Wolkoff said. "I did not write this book for money or take any advance for this. This was a chance for me to tell the true story and not be anonymous anymore. I'm on the record -- all the stories that crushed me, burned me and, you know, the White House propaganda machine made up about me, broke me, my integrity, my life literally went into shatters because of exactly what you are talking about."

"I didn't press record on a friend," she continued. "I pressed record after I was accused of a crime and I was thrown under the bus and I was told by my friend, 'I'm sorry, this is the way it has to be.' That's when I pressed record. Otherwise, I agree with you completely, and I would never record a friend, but what happened to me is, again, the White House putting out their own messaging and again, it's almost cultish, Meghan, and it's wrong. They will say things over and over and over."

"The fact is, I do have the facts, I do have the proof and I'm willing to actually stand by every single word, and with this family that is so important because one of the biggest reasons I wrote this book was not only to get my sense of clarity and sense of self back, but it was for the country to understand who these people are," Wolkoff added. "These are the people behind closed doors running our country, and they're not doing it in your best interest, right? For me, you know, it's not what you can, you know, what your country can do for you, which is all about what the Trumps are about. It's what you can do for your country, and that is the main reason I went and helped my friend, because no one else would. There's a lot here to talk about, but there's also a lot here to understand that people don't know yet about them."