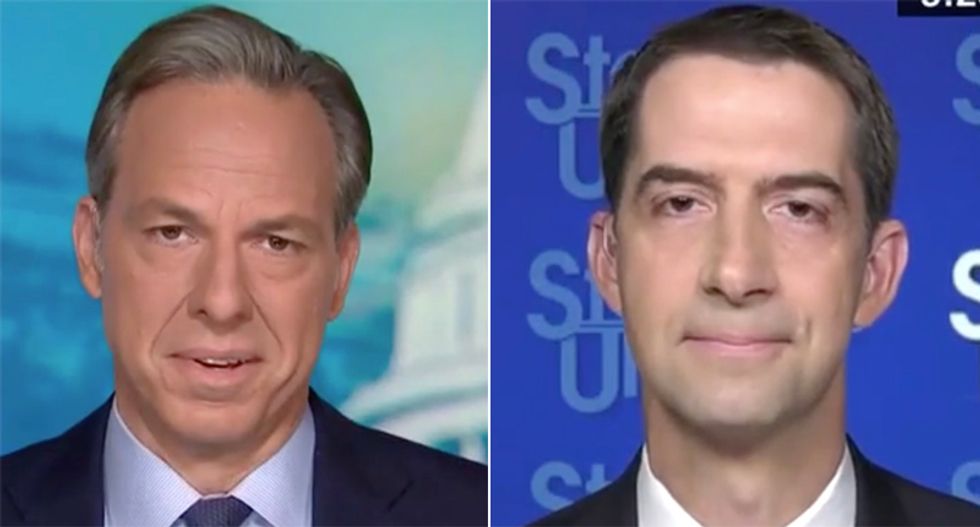 Sen. Tom Cotton (R-AR) was put on the spot on Sunday morning during his appearance on CNN when "State of the Union" host Jake Tapper pressed him over Donald Trump's suggestion he won't peacefully step down if he loses the election.

With Cotton glibly commenting he expected a peaceful transfer of power “in January 2025, after President Trump finishes his second term,” Tapper pressed him about the president's comments.

“You’re not at all disturbed by what he’s saying about if the ballots aren’t counted? " the CNN host asked. "It is really quite alarming to a lot of Republicans his refusal to say, 'of course, if I lose, I will abide by a peaceful transfer of power.'”

Then Cotton spun a series of scenarios that caused Tapper to laugh and claim it would need a lot of fact-checking,.

"This is just another case where the Democrats are projecting some of their own intentions onto Donald Trump. It wasn’t Donald Trump who sicced the FBI on his opponent. That was Barack Obama and Joe Biden in 2016. Hillary Clinton is the one that said Joe Biden should concede under no conditions, Cotton explained. "And it was Hillary Clinton’s former campaign chairman who projected that if Joe Biden loses, he would recommend that California and Oregon and Washington threaten to secede from the union to change the results. The Democrats are the ones who should be pressed on whether or not they will accept a loss in November. Because it doesn’t sound to me like they will.”