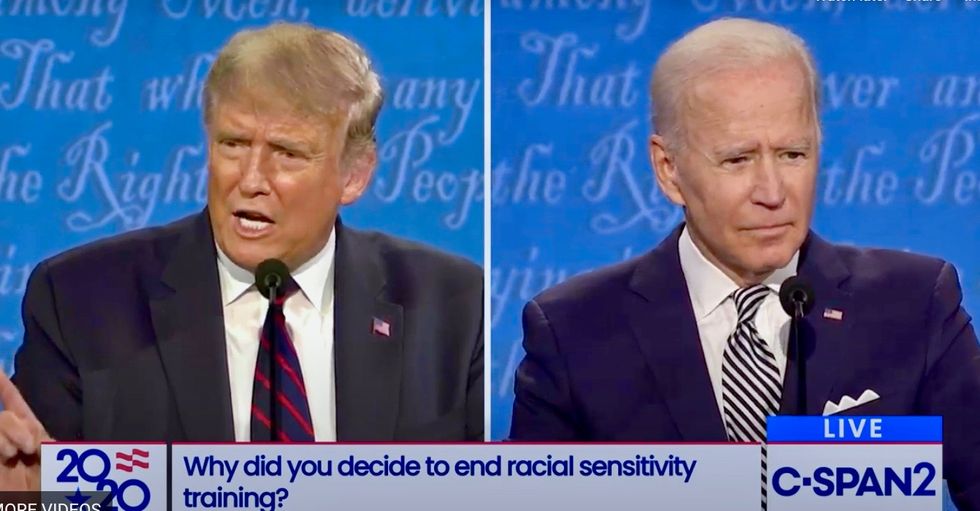 Frontrunner Joe Biden and a politically wounded Donald Trump took the stage in Cleveland for their first televised debate Tuesday, watched by a deeply divided nation 35 days ahead of the most tense US election in recent memory.

There was no handshake as the two men took the stage and while this was due to Covid-19 restrictions, the absence of the traditional greeting symbolized the bitterness engulfing the country in the final countdown to November 3.

From the opening exchanges over healthcare, where Trump accused Biden of being a "socialist," the tension was palpable, interrupting each other.

But before they even appeared for the first of three 90-minute TV showdowns, barbs were flying.

And Trump, facing the threat of being made a one-term president, pushed a conspiracy theory suggesting his challenger needs performance enhancing drugs and might wear an earpiece to get answers during the debate.

Biden, with an impressive lead both in national and swing state polls, was looking to zoom in on public dissatisfaction with Trump's handling of the coronavirus pandemic, which has killed more than 200,000 Americans.

The Democrat was also expected to hammer away at The New York Times expose of Trump's tax avoidance, arguing that this shows the billionaire real estate mogul is a phony when he claims to champion what he calls "the forgotten men and women."

"This election is Scranton vs. Park Avenue," Biden, 77, tweeted just before the debate, referring to his hardscrabble boyhood home in Pennsylvania and Trump's glitzy Manhattan background.

Trump -- who has broken longtime presidential transparency by refusing to publish his tax returns -- reportedly used loopholes to pay just $750 in federal tax during the first year of his presidency. Hours before the debate, Biden published his own tax returns.

Trump, meanwhile, leaned in on his lurid narrative that the Democratic challenger is senile and needs testing for drugs.

And his campaign communications director Tim Murtaugh amplified a new slur spread on social media that Biden was suspected of planning to cheat by wearing an earpiece.

But right before heading into the debate, Biden responded humorously, tweeting: "It's debate night, so I've got my earpiece and performance enhancers ready."

Underneath was a photo of standard headphones and a tub of Jeni's icecream -- "salted peanut butter with chocolate flecks."

On landing in Cleveland ahead of the debate, a senior official on Air Force One told reporters that Trump, 74, is "ready to go."

Giuliani, who has spearheaded shadowy efforts on behalf of Trump to find dirt on the activities of Biden's son in Ukraine, was clear about what his client should do.

"He doesn't have to hold back," Giuliani was quoted as saying by Politico. "I think Biden is a nasty enough guy that you don't have to worry about, you know, being too careful with him."

That was sure to translate to Trump trying to corner Biden over the lucrative job his son Hunter took with a Ukrainian energy company while Biden was vice president under Barack Obama.

While the deal raised ethical questions, there has been no evidence of actual wrongdoing by the Bidens -- and Trump's attempts to prove otherwise saw him impeached by Congress last year for abuse of office.

Trump also went to Cleveland with what he hopes will be a silver bullet -- his nomination of conservative Judge Amy Coney Barrett to replace the late liberal icon Ruth Bader Ginsburg on the Supreme Court.

If Barrett is quickly confirmed, as the Republican-led Senate expects, Trump will have tilted the highest court firmly to the right for years to come.

Democrats are crying foul over the rushed timing but Trump expects the power play to energize conservatives.