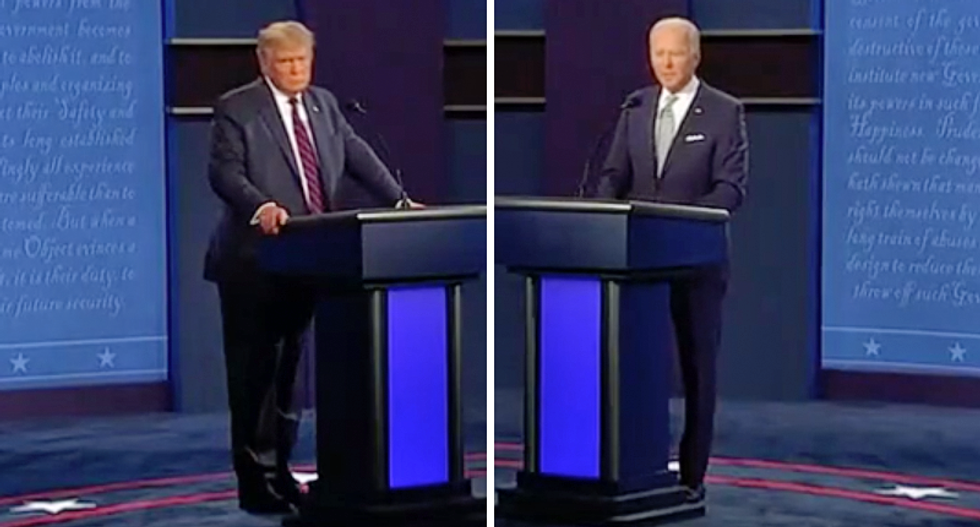 President Donald Trump was asked to call out white supremacy during the first 2020 general election presidential debate -- and refused to do so.

Instead of calling out white supremacists, Trump instead said, “Proud Boys, stand back and stand by!”

Here's some of what people were saying about Trump's views on racism:

Can you refuse to reject white supremacy & also be a president who’s done more for black people than anyone since L… https://t.co/S2P0Qhcd7O
— Joyce Alene (@Joyce Alene)1601433375.0

“Proud Boys, stand back and stand by" says The President of the United States when asked about condemning white sup… https://t.co/JrZcT4nhzC
— Christina Ginn (@Christina Ginn)1601432160.0

I'm still reeling from the fact that the President of the United States could not bring himself to condemn white supremacy
— alexwagner (@alexwagner)1601432814.0

Trump was given a chance to denounce White Supremacy and he choked. #TrumpIsARacist
— Tea Pain (@Tea Pain)1601431901.0

Anyone who cannot unequivocally condemn white supremacy is racist and unfit for the presidency. If you vote for him… https://t.co/AFSS3dHec9
— Eliza Orlins (@Eliza Orlins)1601432587.0

Tonight the whole world saw an American president refuse to condemn white supremacy. This is not the America I love.
— Cooper Hefner (@Cooper Hefner)1601433174.0

The President refused to condemn white supremacy. If you are still an "undecided voter" you are a racist.
— Chris Palmer (@Chris Palmer)1601432409.0

Tonight I learned Trump is all-in on white supremacy, Chris Wallace is a terrible moderator, and we are in serious… https://t.co/j8UITGga81
— JackiSchechner (@JackiSchechner)1601433696.0

Trump made it clear tonight he is the white supremacy candidate. If you missed it, read the transcript. If you vote… https://t.co/C8ctGD9p2o
— Mike Birbiglia (@Mike Birbiglia)1601433722.0