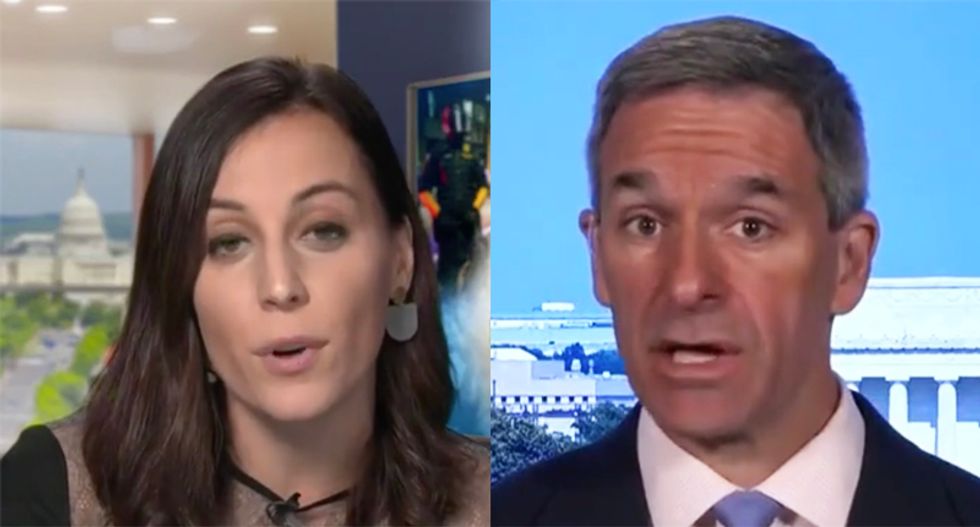 Appearing on MSNBC on Friday morning, acting deputy Department of Homeland Security head Ken Cuccinelli appeared to want nothing to do with defending Donald Trump's claim that there have been planeloads of anarchists and looters who have been traveling around the country to incite violent street protests.

Appearing on the network to address the shooting of a man accused of killing a Trump supporter in Portland, MSNBC host Hallie Jackson asked Cuccinelli about Trump's repeated claim that appears to be a conspiracy theory.

"So President Trump, when he was at Joint Base Andrews, talked about -- he was talking about the protests and unrest that happened around this country, talked about a plane that was filled up with what he calls looters, anarchists, rioters, people looking for trouble, citing this sort of very specific incident," Jackson began. "What evidence do you have of that, where did it happen, and when?"

"Well, I don't, you know, do DOJ's job, that's more in their space. when you look at --," Cuccinelli hesitantly replied.

"Would Homeland Security not be briefed on such an incident?" Jackson cut in.

"That is a very distinct possibility, yes," he conceded. "But over half the arrests in Kenosha were from outside the area, where Portland they're all from the Portland area. We're seeing different situations where people are traveling to participate in some of this violence, and that's obviously a major concern for us."

"It does seem there may be a difference from what the president is talking about, the specific plane filled with rioters and people looking for trouble. You say there is a distinct possibility DHS may have been briefed. Are you aware of such a briefing?" Jackson persisted.

"So I think you asked if DOJ would always share that information with us and that is not the case. So, you know, we're not aware of that specific information" the acting DHS head demurred. "But we're not -- we don't have legal authority over domestic terrorism, those sorts of activities. So that's an FBI authority -- they're the ones who investigate those things."