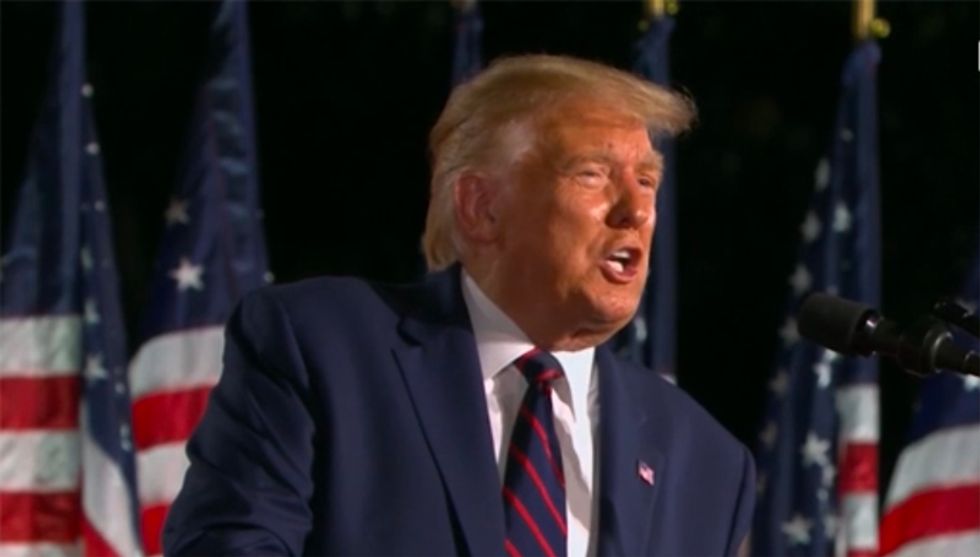 Donald Trump at the RNC -- screenshot

On Tuesday, The New York Times profiled how President Donald Trump's strategy to try to win back the suburbs has been reduced to a campaign of raw fear — and some of the possible reasons why it hasn't been working.

"Republican strategists said their research showed a vulnerability for Mr. Biden with swing voters: the belief, advanced frequently and misleadingly by Mr. Trump, that Mr. Biden is overly susceptible to influence from the far left," reported Jeremy Peters. "What followed was some of the bleakest and dystopian messaging of the campaign so far, with Trump campaign ads featuring fictitious unanswered calls to 911 because of cuts to public safety. An ad that went out in July shows a man prying open the door to an elderly woman’s home with a crowbar. When she reaches 911, a recording tells her, 'Leave a message and we’ll get back to you as soon as we can.' The man approaches, and the camera cuts away to a shot of the phone lying on the ground."

There is no clear polling data to suggest these ads have impacted the race. Indeed, data suggest that voters trust Biden more to handle unrest than Trump.

It's a similar playbook to the one Trump used in the final weeks of the 2018 midterms, when he tried to raise fear of migrant caravans heading for the United States from Central America. However, the report noted, "Democrats can point to the 41 House seats they picked up in 2018 to show that the Republican strategy did not work then, and that voters were more concerned about health care than havoc."

"The suburbs helped propel Democratic gains in 2018, suggesting that if voters were motivated by fear, it wasn’t gangs and migrant invasions they were worried about," said the report. "Concerns about crime then and now are real, [Democratic strategist Dan] Sena said, 'But not any scarier than the idea of someone taking away their health care.'"

"With more Democrats speaking the language of law enforcement, Republicans may find their approach even less effective," continued the report. For example, freshman lawmaker Sharice Davids (D-KS) "spoke of being raised by a mother who served in the Army and then worked for a time in law enforcement. She said she has attended rallies for racial justice and sat down with police leaders. Somewhere in between, she said, is where most Americans are."