Trump is undermining the GOP's claim to patriotism -- and Republicans don't seem to care: Joe Scarborough 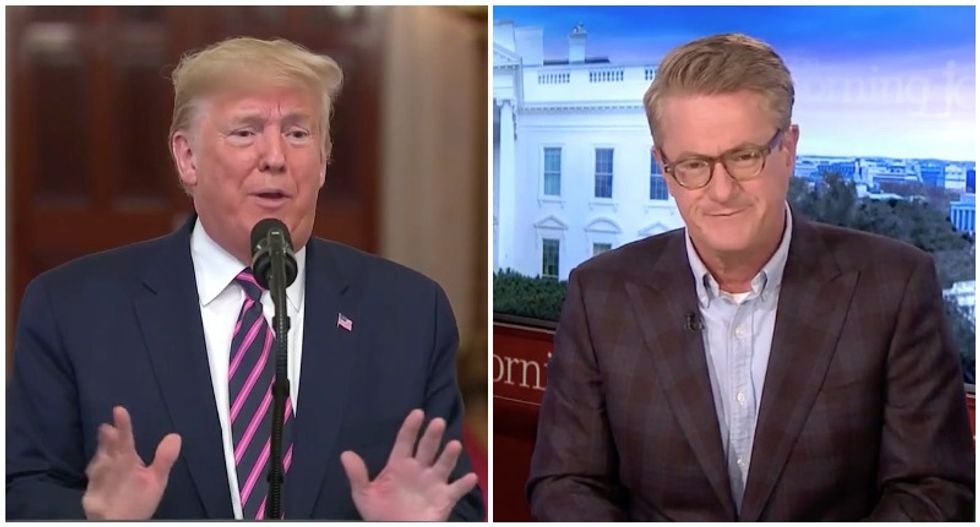 MSNBC's Joe Scarborough compared the culture clash in today's political debate to an actual violent clash between construction workers and antiwar demonstrators in 1970.

The "Morning Joe" host wrote an op-ed for the Washington Post tracing some of the polarization of the current moment to the "Hard Hat Riot" at the height of the Vietnam War protests -- and four days after the Kent State massacre.

"Union workers streamed out of the 'soaring red steel skeleton' of Tower A on the construction site of the World Trade Center and raced to an antiwar demonstration underway on Wall Street," Scarborough wrote. "The workers later told reporters they were determined to stop protesters from denigrating U.S. soldiers fighting in Vietnam."

"Chants of 'Love it or leave it' and shouts about killing 'commies' rang out above the chaos, before workers seized an American flag at Federal Hall and began singing 'God Bless America' under the watchful gaze of George Washington’s statue," he added.

President Richard Nixon thanked God for the "hard hats," and Republicans worked for decades to solidify the support of blue-collar workers like them through appeals to militaristic patriotism -- but Scarborough wondered what those guys would think of President Donald Trump slurring service members as "suckers" and "losers."

"Trump’s Republican Party has been damaged yet again by their leader’s offensive statements," he wrote. "It has also lost any claim it ever had at being the U.S. military’s bulwark against left-wing attacks. A recent Military Times poll suggests that most active duty troops agree, with a plurality supporting Democratic nominee Joe Biden’s presidential bid."

That left Scarborough wondering, as he has throughout Trump's presidency, when GOP lawmakers would finally turn on him.

"Perhaps Lindsey O. Graham was right when he predicted that Trump would destroy the Republican Party," Scarborough wrote. "The question that remains is why the South Carolina senator and so many of his peers stay silent while the honor of our military leaders is under attack by America’s president. One wonders what the hard-hat rioters would have thought about that."