'Trump keeps descending more and more into chaos' as he ignores all advice: Morning Joe 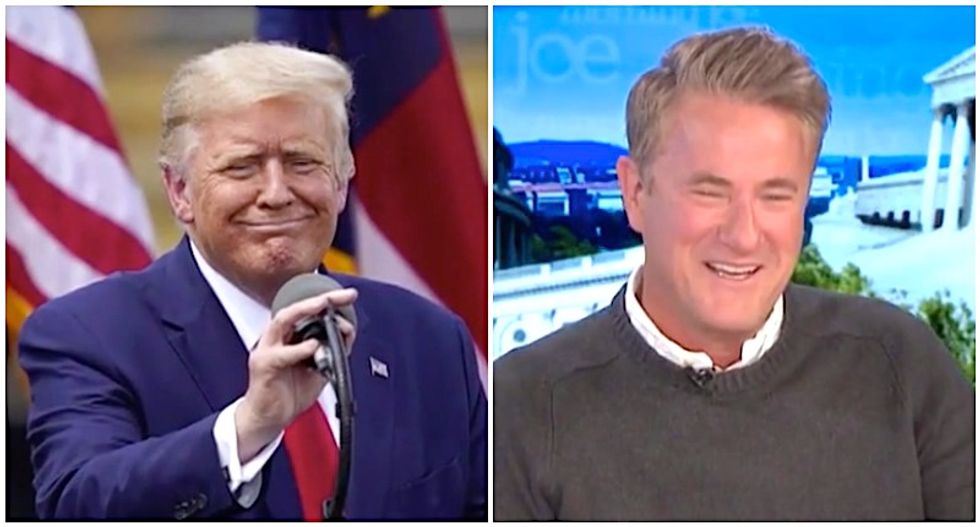 MSNBC's Joe Scarborough mocked President Donald Trump for ignoring his campaign's advice and sowing chaos ahead of the election.

The "Morning Joe" host said Trump was incapable of offering steady leadership during the coronavirus pandemic and resulting economic wreckage, and he said squandered every shred of credibility he might have had.

"I spoke to my doctor yesterday, who laughed at the prospect of getting vaccines," Scarborough said. "I said we get a notification, I said are you going to get it? He said, are you kidding me? It's not going to be close to getting a vaccine by early November, and even if we did, it would not be tested adequately enough."

"This chaos candidate, which Jeb Bush called him the chaos candidate, as well, in 2015, I think, but the whirlwind that surrounds Donald Trump -- no masks, he's mocking Joe Biden for wearing a mask yesterday. No testing, he has said publicly that he told his administration to stop with the testing. Pushing convalescent plasma as, you know, government by gesture right before the RNC so he could have the big announcement before the RNC that we're turning the corner, still saying last night that we're turning the corner."

"This is basically magically going to go away, like he's been saying for so long," Scarborough continued, "and then, with Air Force One behind him, speaking to a reporter, tells voters in North Carolina to commit a felony, and then, making that even worse, more chilling, the attorney general of the United States saying he doesn't know whether that's a crime and then starts rambling on in the CNN interview with Wolf Blitzer about the possibility of vote fraud, trying to set up this fall the possibility of the attorney general stepping in when Donald Trump loses the vote and loses the Electoral College to step in and say wait a second, we need to put a halt to these procedures."

"It is chaos, and then you look at Joe Biden speak and the contrasts are remarkable," he added. "But again, Donald Trump keeps descending more and more into chaos, no matter what his team plans for him to do. He can't stay on script, he continues to make these terrible mistakes and, by doing so, makes Joe Biden a guy who's been seen for 30 years as kind of being politically undisciplined and off the cuff, suddenly making Joe Biden look as steady as Dwight Eisenhower by comparison."