Trump makes it clear: He revels in the killing of his political opponents 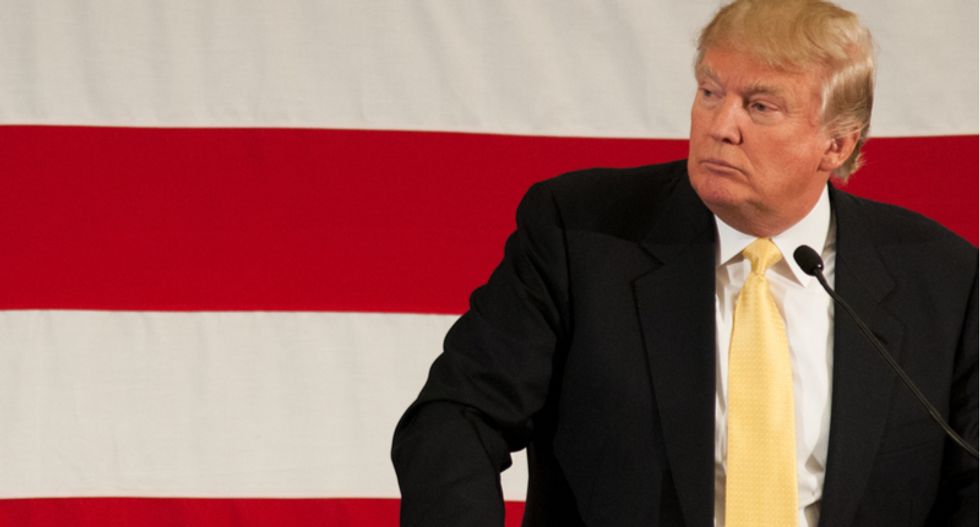 Donald Trump speaks at the First in the Nation Leadership Summit in Nashua, NH, on April 18, 2015 (Andrew Cline/Shutterstock)
For all the demands that former Vice President Joe Biden condemn rioting and looting, no serious observer actually thinks he supports violence in the streets. The most plausible criticism of Biden is that he's a creature of the existing political system — a product of and adherent to the established institutional order. He doesn't want violence and chaos to shake the foundations of society.President Donald Trump, on the other hand, really does relish chaos, and he cares little for any institutions that he doesn't see as directly benefiting him. And in a new Fox News interview this weekend, he made clear that he's not just a fan of violence — a view he has expressed repeatedly, even if he occasionally reads from scripts that say the opposite — but he is actively pleased by the deaths of his political enemies.

While discussing with host Jeanine Pirro the fact that U.S. Marshals — a part of the Justice Department, a part of Trump's administration — killed the avowed antifa activist Michael Forest Reinoehl, the president expressed no regret at his death. In fact, he was triumphant about the killing.

Here's the section of the transcript, per Factba.se:

Trump: They are arresting a lot of people. Now, we sent in the U.S. Marshals for the killer, the man that killed the young man in the street — he shot him, I mean it was on television.

Trump: Cold blooded killed him. He didn't like his hat or he didn't like something — and it wasn't a Trump hat.

Trump: It was a lot — it was a religious hat.

Trump: And he shot him — cold blood. Two and a half days went by and I put out, when are you going to go get him? And the U.S. Marshals went in to get him and in a short period of time — they ended in a gun fight, this guy was a violent criminal —

Pirro: There are a lot of them out there.

Trump: — and the U.S. Marshals killed him. And I will tell you something: That's the way it has to be. There has to be retribution when you have crime like this. There can't be guys standing up that want to fight, they want to fight — you can't throw bricks at people with shields on.

Here's what we actually know. Contrary to Trump's claim, Reinoehl's killing of Aaron Danielson, who was wearing a hat for the far-right group Patriot Prayer, was not clearly in "cold blood." Video suggests a conflict between the men in which Danielson began firing pepper spray at Reinoehl, who then shot Danielson twice with a gun. That day, Portland had been the site of a pro-Trump caravan, which at times turned violent. Trump supporters fired pepper spray and paintballs into crowds, and at least one video showed them aggressively driving through a crowd of pedestrians.

Before his death, Reinoehl claimed he was acting in legitimate self-defense against Danielson, who he said he believed had a knife. It's not clear Danielson actually had a knife. It's also hard to see how plausible a self-defense argument would have been had a case or trial proceeded, and now we'll never know. It is reasonable to believe that Reinoehl would have rightly been found criminally culpable in Danielson's death.

But Trump showed no interest in actually determining Danielson's guilt through the criminal justice process. It is truly a shame that we won't ever have a better understanding of the incident, but not in the president's view. He's already made up his mind. He demanded the U.S. Marshals act, and he's pleased that Reinoehl was killed.

"That's the way it has to be," he said. "There has to be retribution when you have crime like this."

Usually, political leaders call for justice in these cases, not retribution. And justice would have entailed letting the criminal proceedings play out, rather than having law enforcement kill Reinoehl upon finding him.

The circumstances of Reinoehl's death remain murky. Witness accounts of his death conflict, and it's not clear whether the killing was justified. In this case, not only should we regret the fact that the Danielson killing cannot be resolved through the criminal justice process, but we should demand that Reinoehl's killing be vigorously examined to determine whether the officers acted legally and with necessary force, or if they unjustly killed him. But again, Trump showed no interest in getting to the bottom of Reinoehl's death. He only cares about the death of Danielson, one of his supporters. The death of Reinoehl, a political opponent, leaves open no questions of justice for the president — it's just "the way it has to be."

This is even clearer when examining Trump's reaction to another shooting — that of Kyle Rittenhouse. Rittenhouse, the 17-year-old Illinois resident who brought a semi-automatic rifle in a misguided effort to respond to the unrest in Kenosha, Wisconsin. He ended up shooting three people there, killing two.

According to the criminal complaint, Rittenhouse first shot and killed Joseph Rosenbaum, who was not armed. One witness said Rosenbaum tried to disarm Rittenhouse. Rittenhouse ran away from the scene, and a group of people eventually caught up with him, trying to stop him. He fell to the ground and shot two more people who had come after him. One person hit him with a skateboard, video showed. Another was holding a handgun. Rittenhouse again fled the scene, walking past police even while still armed, and returned home. He was later arrested in Illinois, and he is facing charges of murder. His attorneys have claimed he is innocent and was acting in self-defense.

Though the Rittehhouse shootings extend over a longer time period than the Reinoehl's shooting, the incidents bear striking similarities. Both Rittenhouse and Reinoehl were armed with guns and killed others who were not armed. Both claimed they were acting in self-defense, despite the fact that they apparently used disproportionate force to respond.

But Rittenhouse, who has painted himself — like Trump — as a defender of the police, is still alive. And instead of arguing that his death would be good or that he was a cold-blooded killer, Trump has defended Rittenhouse.

"That was an interesting situation," Trump told reporters of the Rittenhouse killings. "You saw the same tape as I saw. And he was trying to get away from them. I guess it looks like he fell and then they very violently attacked him. And it was something that we're looking at right now, and it's under investigation. But I guess he was in very big trouble. He would have been — probably would have been killed, but it's under investigation."

In this case, Trump argued in favor of a self-defense case for Rittenhouse. He showed no sympathy for the people Rittenhouse killed, as he did for Danielson. When discussing Reinoehl, Trump didn't even mention the fact that he had similarly claimed self-defense.

Though the groups involved in both incidents have clear partisan valences, the reaction to the cases need not be partisan. It should be easy to say, at a 1,000-foot level, that the tensions need to come down and the escalation must stop. We can say that anyone who has a hand in the death of someone else should be investigated, regardless of their political affiliation, and everyone should have the right to put forward a legal defense if they face criminal charges.

But this is not the president's view. When someone he views as on his team kills others, he looks to exonerate them. He has no sympathy for those killed. And when someone on his team is killed by someone who he views as an opponent, they have no right to due process, no benefit of the doubt.

We shouldn't be surprised. Trump previously shared a video that declared: "The only good Democrat is a dead Democrat."