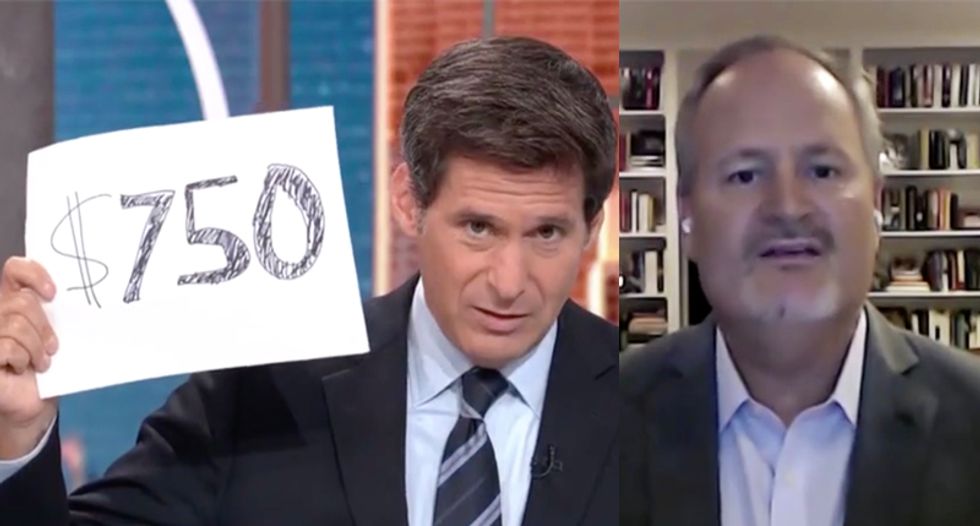 Speaking with hosts John Berman and Alisyn Camerota, the Bloomberg editor noted that he had seen some Trump tax returns before, but that the revelations in the bombshell New York Times report ka late Sunday revealed a president who would be a prime target for manipulation.

'First and foremost, I think the broad contours of what "the New York Times has puts numeric clothing on things we've known for a long time -- that he's a bad business man, that he routinely runs losses in his business, that he's a serial bankruptcy artist, and that he gorges on debt," O'Brien began. "It puts new clothing on some other very important issues around how much taxes he pays, where his current indebtedness might lead and I think what it means for policymaking, from the Oval Office."

"I think two of the very salient things that pop out at this from me initially is, yeah, I think Donald Trump is a national security threat," he continued. "Someone who is in businesses that are being ravaged right now by the coronavirus pandemic, putting his business under stress, and also has a lot of debt that he'll either need a financial rescue for or he'll be forced to fail to sell some of what he has, is someone who is a potential mark for foreign interests or other interests that want to get to the president.'

"Secondarily, I think the other takeaway out of this is a president who pays zero in taxes in some years, pays $750 in each of his first two years, only $750 in taxes, and then engineers a massive tax cut that benefits the most affluent Americans in the country and corporate America, but doesn't take people like him to account for paying their fair share," he continued. "I think it's thrown into even higher relief when we learn the president himself is paying no taxes at all."