Trump staged a 'fascist photo shoot' in Kenosha in hopes of staying out of jail: Columnist 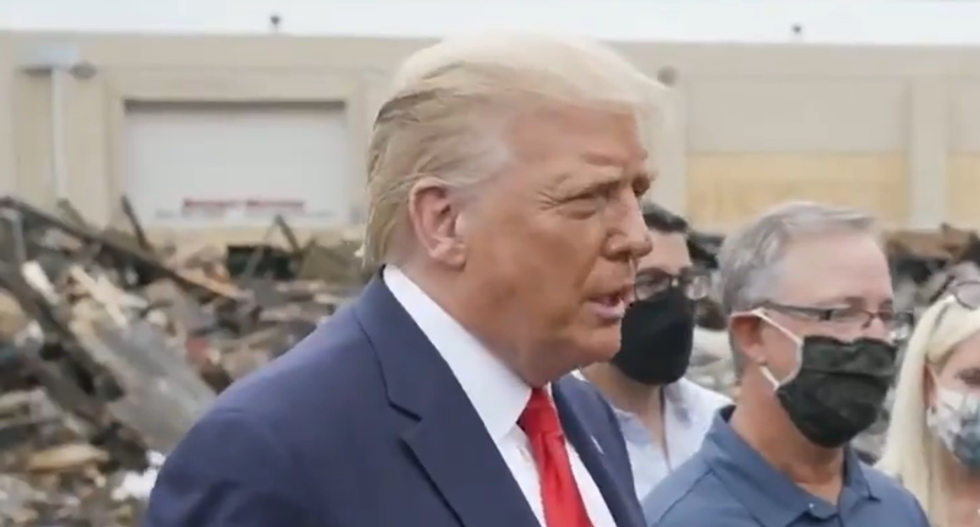 President Donald Trump went to Wisconsin and he went through the motions of being president there, but if his manner seemed off, one columnist wrote, that's because he didn't understand why he was really there.

The president visited Kenosha over the objections of the state's governor and the city's mayor after police shot a Black man in the back, and Trump defended a teenage supporter who gunned down two protesters during a visit that didn't seem to make any sense, wrote The Daily Beast's Molly Jong-Fast.

"Trump knows he needs to win Wisconsin in order to stay president and not go to jail, but since Trump doesn’t really understand what the president does, there’s an odd somewhat tragic and slightly hilarious disconnect," Jong-Fast wrote. "Trump is like an actor in a play about the presidency, but he’s forgotten all his lines."

In addition to praising a teenage vigilante, Trump claimed he'd met with the pastor for Jacob Blake -- whose family doesn't have a pastor -- and bizarrely claimed looters and anarchists had taken over a commercial flight.

"Trump went to Kenosha because he needs to win Wisconsin so he won’t have to face prosecution for his numerous crimes," Jong-Fast wrote. "And as a Trump trip goes it wasn’t particularly insane except for the fact that he went there in the first place against the wishes of local leaders begging him not to come. But the law-and-order president has no time for such frivolity as the will of lawmakers. And then of course, Trump did ignore all of the actual human victims of the crimes. But he did have fun wandering around posing for pictures in front of a burned-out lot because nothing says law and order like the president who respects neither doing a fascist photo shoot in Wisconsin."