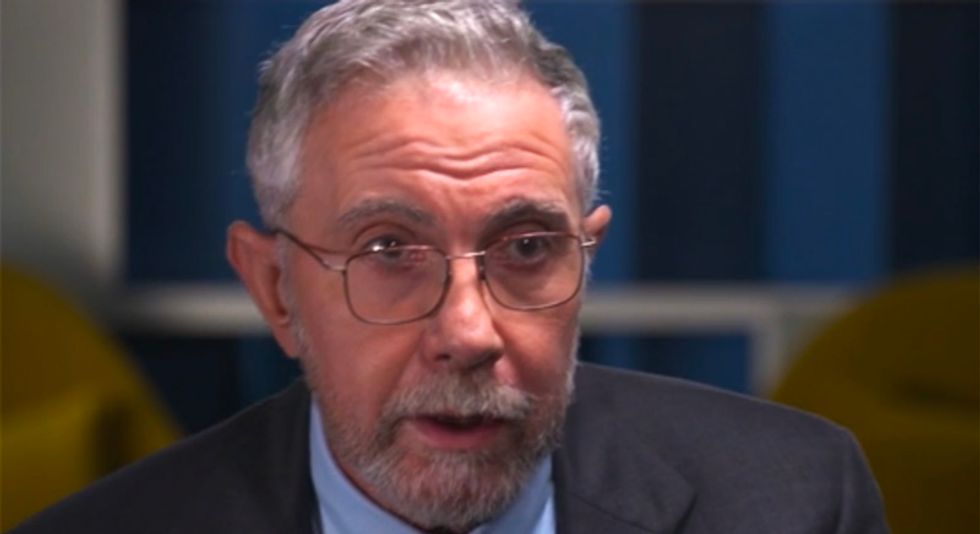 In a column for the New York Times, Nobel Prize-winning economist Paul Krugman pondered why Donald Trump is once again ramping up his anti-mask rhetoric at a time when his health care advisors are urging the public to keep wearing the protective coverings. He then concluded it is nothing less than a cynical political maneuver by the president that will likely lead to more deaths.

Earlier this week the head of the CDC urged Americans to keep using masks, saying it was their best defense against becoming infected with COVID-19 only to have the president undercut that message on the same day.

Posing the question, "What is it with Trump and face masks?" Krugman suggested that -- to the president's way of thinking, the masks are a symbol of his failure to contain the pandemic which, in turn, is one of the leading factors for why he is losing in the polls to former Vice President Joe Biden.

"The case for masks doesn’t rest merely on detailed scientific research that laypeople may find hard to understand. At this point it’s also confirmed by the lived experience of regions that suffered severe coronavirus outbreaks but brought them under control, " he explained. "In short, anti-mask agitation isn’t really about freedom, or individualism, or culture. It’s a declaration of political allegiance, driven by Trump and his allies."

Rhetorically asking why the president has made the simple request for people to wear masks into a partisan issue, Krugman said it is merely "the efforts of an amoral politician to rescue his flailing campaign."

"The economy’s partial snapback from its plunge early this year hasn’t given Trump the political dividends he hoped for. His attempts to stir up panic with claims that radical activists are going to destroy the suburbs haven’t gained traction, with voters generally seeing Joe Biden as the better candidate to maintain law and order," he suggested. "So his latest ploy is an attempt to convince people that the Covid-19 threat is over."

Calling wearing masks, "the simplest, most sensible of public health precautions," Krugman said that doesn't work into Trump's political calculations which means, "this ploy probably won’t work. But it will lead to a lot of unnecessary deaths."