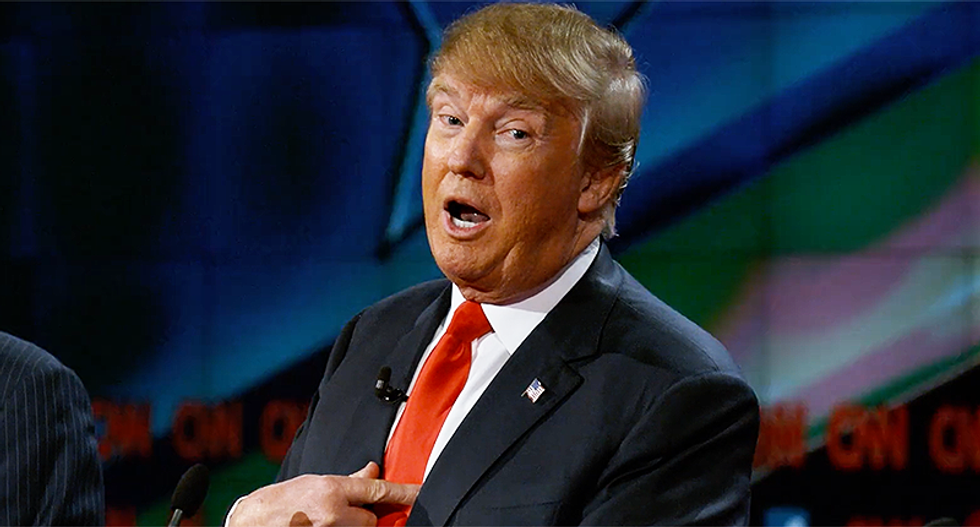 The Washington Post Editorial Board issued a series of eight pieces outlining why President Donald Trump is a serious danger to the United States and to democracy.

The first of the series appeared Tuesday. The editorials outlined the absurd claims by Trump that other than COVID-19, he's done a great job as president. It comes the morning after Trump claimed that the coronavirus "affects virtually nobody."

The Post called it "fitting" that Trump would say something like that after speaking more than 20,000 lies during his presidency. "His own negligence, ignorance and malpractice turned what would have been a daunting challenge for any president into a national disaster," the editorial continued.

Even without the coronavirus, there wasn't anything to write home about from Trump's accomplishments. He had three years, two of which with a Republican House and Senate, to achieve the laundry list of 2016 campaign promises. It's been five years since Trump said that he would reveal his healthcare plan to the public and he still can't make that happen.

In part two of the editorial series, the Post explains that Trump's relationship to authoritarianism is a dangerous part of his personality that has put the United States in a difficult position with allies. Trump would put global freedoms in greater danger.

"Mr. Trump’s most conspicuous aid to tyranny has been his relentless support for Russian President Vladimir Putin, who aided Mr. Trump’s 2016 election and whose foreign policy is laser-focused on weakening the United States and dividing it from other democracies in the NATO alliance," said the Post. "Mr. Trump has provided invaluable support for this cause, most recently by ordering a withdrawal of U.S. troops from Germany. While he has not hesitated to publicly trash NATO and the leaders of Germany, Canada and Britain, Mr. Trump has never uttered a word of criticism of Mr. Putin, even after receiving U.S. intelligence reports indicating that Moscow paid bounties to the Afghan Taliban to kill U.S. soldiers."

The third piece of the Post alleges that Trump has been a disaster at appealing to the needs of everyday American people. His attitude has been that his leadership is about him, his agenda and his needs, not about the American people.

"The great fear of these early Americans was that the presidency could fall into the hands of a demagogue: someone like the current incumbent, Donald Trump, whose impact on the nation’s political culture over the past three-plus years has been, if anything, more damaging than his impact on public policy," said the Post. "Where past occupants of the office have at least paid lip service to its inspirational aspects, and where both of his immediate predecessors, George W. Bush and Barack Obama, actively campaigned on themes of unity, Mr. Trump lives by a different credo."

Trump's philosophy has been more about attacking first and making excuses about it later.

In part four, the editorial board said flatly, "four more years of Trump’s contempt for competence would be devastating."

"I alone can do it," was the philosophy he revealed in 2016, since then he's proved that his desires come before the experts. It's the reason that Trump said he didn't want to be honest with Americans about the coronavirus. Fears and "panic" could crash the economy, and that was his one campaign success story.

The editorial board details all of the times Trump put a political shill in a key position instead of an expert. Even when there were experts, it isn't as if he listened to them.

“My function, really, as an economist is to try to provide the underlying analytics that confirms his intuition,” said Trump's trade adviser Peter Navarro. “And his intuition is always right in these matters.”

No one is there to serve America. It has become clear the purpose is to serve Trump.

In part five, the editorial board explained that Trump would further close the doors to any new Americans. Fewer people means fewer taxes and revenue for communities. It means the American melting pot is closed for another four years and migrants and their children will likely continue to be tortured by the American government, opening the country to lawsuits and international backlash.

Part six details the overwhelming corruption that has sprung up in Trump's government. Outside of Trump's own efforts to profit off of the government, his appointees have used taxpayer dollars to buy clothing as Secretary Scott Pruitt did, or use a government helicopter to shuttle to campaign events like Secretary Ryan Zinke did.

"Trump, according to data compiled by [a] watchdog group, has spent one out of every three days he has been in office at one of his businesses, more than half of them at golf resorts," said the Post. "The trips have helped propel a stream of revenue to the Trump Organization from federal agencies and Republican campaign groups, according to Post reporters who ferreted out the fact that more than $900,000 in taxpayer money has been spent on rooms, resort fees, golf carts and other expenses. That total might not be complete because the Trump Organization won’t disclose what it has collected and the administration has not been forthcoming — in keeping with the president’s secrecy when it comes to such financial matters as his tax returns."

Part seven warns that with Trump in office and Senate Majority Leader Mitch McConnell in charge, Trump has been able to operate without checks and balances. As with everything, Trump thinks that the presidency is a kind of kingship and the other branches of government are there to serve him. The Justice Department has been an extension of that.

"Whether out of ideological fervor or fear of Mr. Trump’s wrath, Mr. Barr has aided the president’s friends, hurt his enemies and vociferously attacked anyone who has found these actions untoward," said the Post. "Mr. Barr sicced handpicked prosecutors on the Russia probe, despite independent investigations concluding it was warranted. Then Mr. Barr intervened to lessen the charging recommendation for Trump friend and convicted felon Roger Stone. Mr. Barr also ordered charges against Mr. Flynn, the admitted felon whom Mr. Trump had asked Mr. Comey to help, to be dropped. Yet another Justice Department official, FBI General Counsel Dana Boente, was fired after he opposed cooperating with the plot to clear Mr. Flynn."

Finally, the Post concludes that Trump's greatest legacy is lying. It puts Americans, and the rest of the world, in a position where no one knows who or what they can trust. Worse, however, is Trump's war against anyone trying to reveal the truth.

"Mr. Trump, meanwhile, has waged a relentless campaign to discredit the institutions that seek to disseminate truth and discredit false stories, especially the U.S. intelligence community and the news media," the board writes. "Thoroughly documented intelligence reports on Russia’s interventions in U.S. politics, including the current election campaign, are, he says, 'a hoax' conjured by a 'deep state.' Media revelations of corruption and malfeasance in his administration are 'fake news.'”

The Post has never done such a detailed takedown in an endorsement or anti-endorsement. Check it out here.