WATCH: Late-night hosts go off on Trump for ‘chilling’ plan ‘to steal the election’ 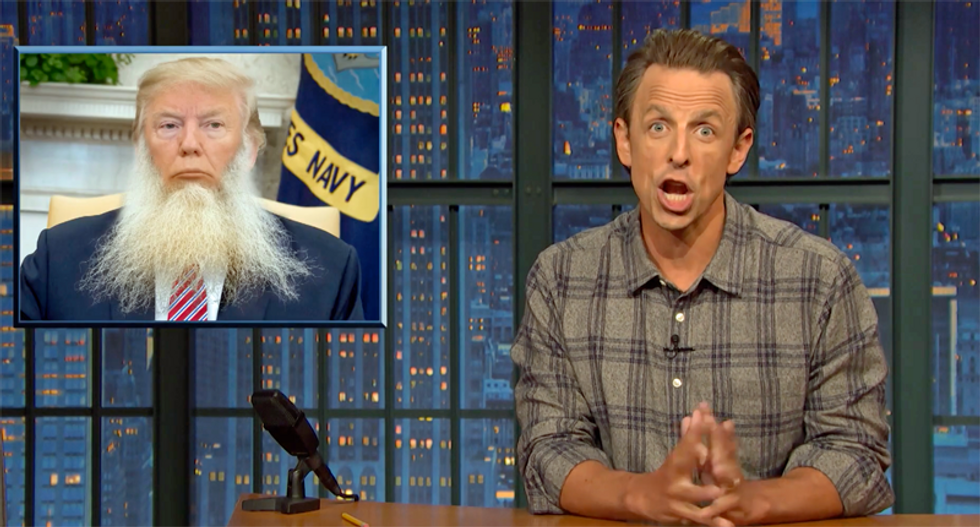 Late-night television hosts harshly criticized President Donald Trump for refusing to say there would be a peaceful transition of power if he loses the November election.

"In one of the more chilling moments of his presidency -- and they've been a few -- Donald Trump refused to commit to a peaceful transition of power as Republicans formulated the plan to steal the election through the courts," Seth Meyers explained.

"We're as close as we've ever been to losing our democracy and watching our government transform into an autocratic regime," he continued. "It's happen right in front our eyes right now, you don't need to wait for Trump to roll down Pennsylvania Avenue on a tank in green fatigues with a long chin-beard -- especially since if he did try to grow one he'd probably just look like a very sick chihuahua."

Meyers noted Trump was "effectively threatening violence unless ballots are thrown out and he's allowed to stay in power."

"If this were happening in any other country, you'd expect to see pro-regime militants driving through the streets in pickup trucks, attacking people and waving flags -- awwwwww," he said, as images of just that appeared on screen.

Over on Comedy Central, "The Daily Show" also took Trump to task.

Host Trevor Noah said, "the world's oldest democracy is about to become its newest dictatorship."