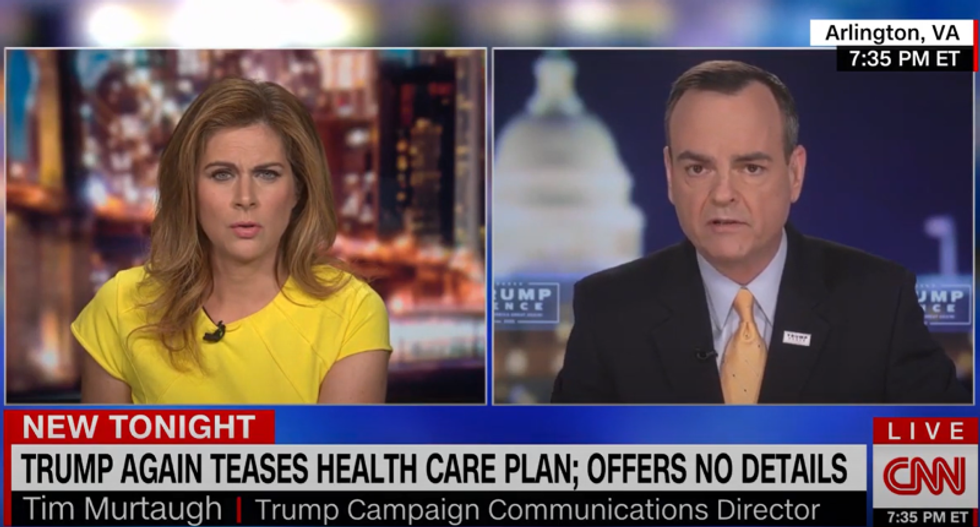 On CNN Wednesday, Erin Burnett grilled Trump campaign communications director Tim Murtaugh on why he still has no health care plan despite his promises.

"This has been promised since day one and we still don't have any specifics," said Burnett. "He was asked in the town hall last night, did not provide any. Is this real or just an empty campaign promise?"

"Of course it's real," said Murtaugh. "Let's remember we were all told as Americans that Obamacare had fixed everything and that if you like your doctor you can keep your doctor, and if you like your plan, you can keep your plan ... President Trump has a real record of improving things with health care." He added that Joe Biden's plan "is a march towards socialized medicine and would ultimately eliminate the private health insurance for 180 million Americans."

"Tim, I'm pointing out you don't have a plan," said Burnett. "The president has said for three years he's going have to a plan. It's going to be better. I understand the criticisms of Obamacare. We've heard it and dealt with it. You got rid of it and there's been no plan to replace it and no specifics. Why is it taking so long? Why is it now going to come right before election day?"

"I would defer to the White House on the details of the plan and when it's coming out," said Murtaugh. "But the president's record he has already established in offering lower priced insulin for lower income people, driving down the price of prescription drugs, allowing prescription drugs to be imported from other countries, driving down Obamacare premiums, and getting rid of the individual mandate which was unconstitutional, forcing people to buy a product they didn't want or perhaps didn't need."

"But Joe Biden has a plan out there," said Burnett. "President Trump has promised one for three years. If there was a plan, we would have seen it by now. Pretty obvious, right?"

"I think we've gone over this question a couple of times now, and I'm not going to get ahead of the White House," said Murtaugh. "The president has already built a health care record that is leaps and bounds better than Joe Biden's because he was there and helped build Obamacare, which we know was a failure, and now he is proposing a march toward socialism."

"I'm merely going to say I don't think it's fair to the conversation when you say his plan is bad when you don't have your own to defend," said Burnett.