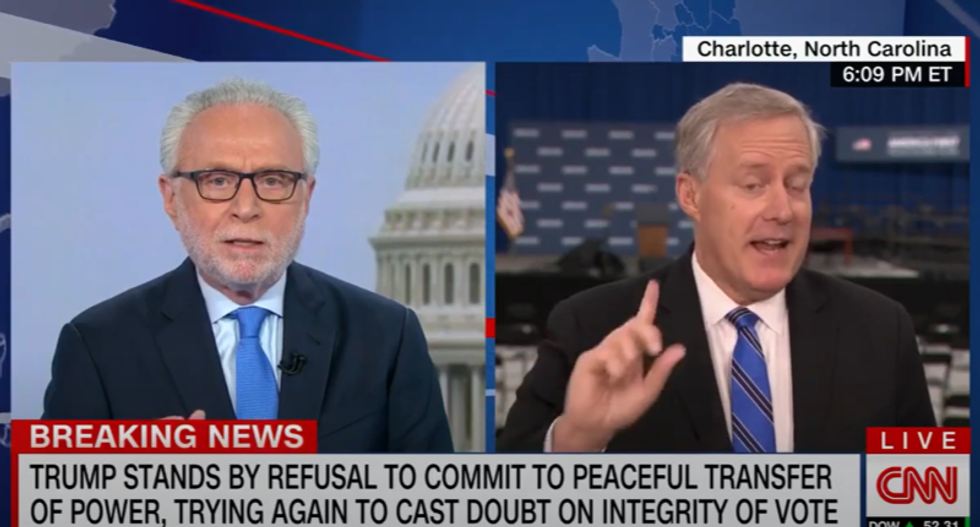 On Thursday, CNN's Wolf Blitzer pressed White House Chief of Staff Mark Meadows about President Donald Trump's refusal to commit to a peaceful transition of power after the election, and became visibly agitated and raised his voice under questioning.

"He said he's not sure the election could be honest here in the United States," said Blitzer. "Is he saying if he wins, he'll accept the results, if he loses, he won't commit to a peaceful transition?"

"I haven't heard him say that," said Meadows. "I can tell you what I have heard him say, Wolf, is really overwhelming concern about mail-in ballots ... we're seeing some activist judges across the country interpret the law that really is not on the books. They're actually making the law. I think that's what most of this is about, making sure that as long as it's free and fair. If it's free and fair, we'll accept the will of the American people. We believe that will be the re-election of Donald Trump."

"I'm hopeful that we'll be able to see a free and fair election on November 3rd, and the results will be what they are, and with that we're planning for a second term," said Meadows. "Perhaps we ought to get Hillary Clinton on, because she was the first one to tell Joe Biden, no matter what the results are, you shouldn't concede."

"But, as you know, Mark, with all due respect, Hillary Clinton isn't running against President Trump," said Blitzer. "She tried do that and lost four years ago."

"Without a doubt," said Meadows. "I've raised my right hand to uphold the Constitution, and there's not as much difference between what Liz Cheney said about upholding a Constitution and supporting a free and fair election. You have to have both of those because if you don't have one without the other, you don't have a democracy, and I would agree with that."