WATCH: Violence flares at Trump rally as woman rants about the N-word 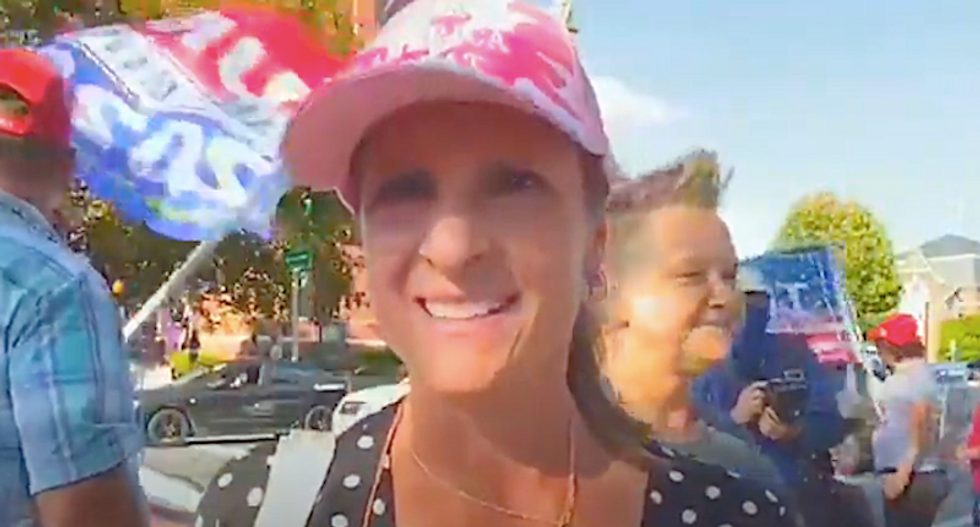 A disgraced talk radio host helped stir up a violent Massachusetts clash between President Donald Trump's supporters and some protesters.

Trump supporters gathered Saturday afternoon to wave "Make America Great Again" flags and cheer the president in Natick, and a group of protesters showed up to confront their demonstration, reported Patch.

Diana Ploss, a former conservative radio host, recorded Facebook Live video of herself confronting protesters when one of them played the song, "F*ck Trump," by YG and Nipsey Hussle.

"Do you know that they use the word 'n*gga' in that song?" Ploss asks the protesters, who then recoil from her use of the racial slur.

Ploss, who was recently fired from WSMN-AM after she berated landscape workers for speaking Spanish, complained that Black people could get away with using the slur while she could not.

The protesters told Ploss that even children understood why white people should not use the slur, and a younger man with the former radio host strongly disagreed.

"Little white kids know not to say it?" he said. "That's bullsh*t. Know how I know it's bullsh*t? Because they say it behind closed f*cking doors. Yeah, they do. I bet half your f*cking friends say it, too."

Ploss continued arguing about the song, until a Trump-supporting woman shoved a protester, and police officers moved in to separate the two groups.

"I didn't realize that we had two sets of words for people," she continued. "So if you're Black you can use the N-word, but if you're white you can't even use it in a sentence to talk about what's in a song."

One man, later identified as 25-year-old David Hepp, was later arrested after police said he drove past Trump supporters and yelled at them, and he then got out of his car after they yelled back.

“He got into a screaming match and began yelling at the crowd and they began yelling back at him,” said police spokeswoman Lt. Cara Rossi. “Someone was filming him (with a cellphone) and he got upset. He reached out and slapped it out of (the woman’s) hand.”

Hepp was chased down by Trump supporters, and he claimed one of them sprayed him with chemical irritant.