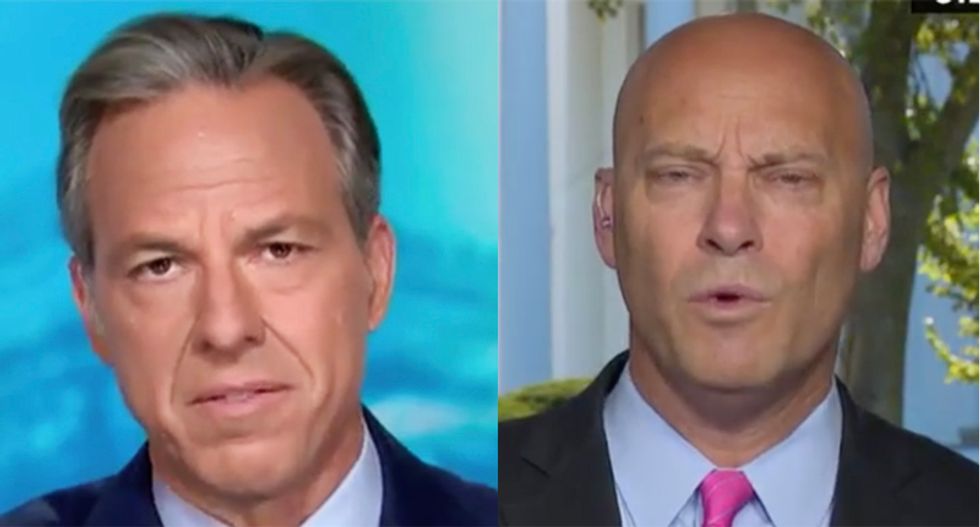 Attempting to defuse accusations of hypocrisy over the rush to replace Supreme Court Ruth Bader Ginsburg, Vice President Mike Pence's chief of staff complained that former Vice President Joe Biden has yet to release nominees he would consider for the high court, only to have CNN's Jake Tapper confront him about Donald Trump's taxes.

Appearing on CNN's "State of the Union," Marc Short tried to brush aside accusations that Republicans are hypocrites when it comes to voting on Supreme Court nominees in an election year when he stepped in it by attacking Biden.

"We still haven't seen a list from Joe Biden," Short told the CNN host. "We welcome a list from Joe Biden who would show the American people here's who I would appoint to the Supreme Court. But as far as the politics of it, I think the American people wanted Donald Trump to be in a position to make these nominations, and it's his obligation to do so."

"I would love to see a list from Joe Biden. I'd also love to see President Trump's tax returns," Tapper shot back.

"I'm glad you think it's clever," the CNN host fired back. "But let's stick to this issue about Ginsburg and the Supreme Court vacancy. Do you want a vote before the election? Is that important to the president?"

"I think that, as you know, Justice Ginsburg was confirmed within 44 days of her nomination," Short replied. "Today we sit 44 days out from election, so it's certainly possible. But I think that the president's obligation is to make the nomination."

2020 Election Alternet All Access Video
Report typos and corrections to: corrections@rawstory.com.
Like this article ? Text `Support` to 50123 to donate.
READ COMMENTS - JOIN THE DISCUSSION

US senators struck a deal Tuesday to create a one-time law allowing Democrats to lift the nation's borrowing authority and avert a catastrophic credit default without requiring votes from the opposition Republicans.

The House of Representatives approved the fix in an evening vote and it is expected to be approved by the Senate in the coming days -- allowing lawmakers to avert the crisis with a simple 51-vote majority in the upper chamber.

Here's how Trump can triumph over Jan. 6 committee — even while losing in court

Efforts by Donald Trump to stymie the House Select Committee to Investigate the January 6th Attack on the U.S. Capitol could allow his allies the legal standing necessary to evade accountability, according to a new report.

"From his faux Resolute Desk at Mar-a-Lago, former President Donald Trump can still wield a wrecking ball that damages the congressional investigation of the insurrection—even if he loses his ongoing battle in the nation’s highest courts," The Daily Beast reported Wednesday.

Jan. 6 Committee files subpoenas for phone records of over 100 people including many Trump associates

The House Select Committee on the January 6 Attack has officially issued subpoenas to wireless companies for the phone records of over 100 people, a "substantial" number of them Trump associates, in an effort to piece together the actions of Donald Trump and his inner circle on the day of the violent insurrection.

The records do not include actual voice or text content, but rather who called or texted whom, when, for how long, CNN reports, and possibly from where.