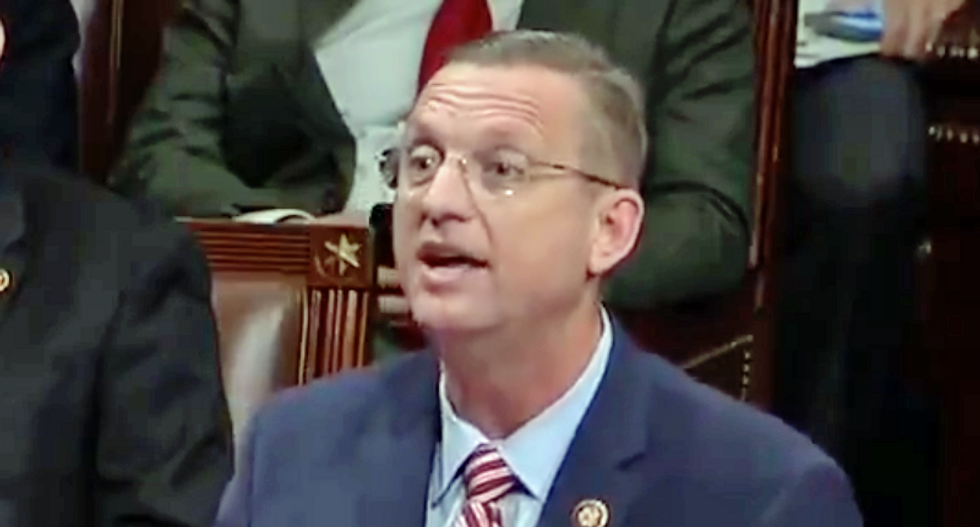 Rep. Doug Collins (R-GA) was roundly trashed on Twitter on Saturday morning for not even making an effort to offer his condolences to the family of the late Ruth Bader Ginsburg after she passed away on Friday night from pancreatic cancer, with the Georgia Republican instead attacking the late justice for her position on a woman's right to choose.

According to the GOP conservative, Ginsburg is responsible for the "murder" of "30 million innocent babies."

"RIP to the more than 30 million innocent babies that have been murdered during the decades that Ruth Bader Ginsburg defended pro-abortion laws," Collins Tweeted just hours after Ginsburg's death was announced. "With @realDonaldTrump nominating a replacement that values human life, generations of unborn children have a chance to live."

Collins was immediately swamped with comments calling him out over his ugly comments.

You can see them below:

RIP to the more than 30 million innocent babies that have been murdered during the decades that Ruth Bader Ginsburg… https://t.co/0X8IUm8v00
— Doug Collins (@Doug Collins)1600478987.0

@CollinsforGA @realDonaldTrump No one will remember Doug Collins in years to come but Ruth Badger Ginsburg will li… https://t.co/fOC6s0u5j0
— Susanb (@Susanb)1600523621.0

@CollinsforGA @realDonaldTrump If you cared about babies, you'd support the ACA, you'd be tearing down the walls of… https://t.co/UwVZhGjoQ1
— Isa-Lee Wolf (@Isa-Lee Wolf)1600523427.0

@CollinsforGA @realDonaldTrump A big fan of yours Doug but this is totally classless and you should really consider deleting it.
— Dr. Steve B 🇺🇸🙏🇺🇸 (@Dr. Steve B 🇺🇸🙏🇺🇸)1600481426.0

@CollinsforGA @realDonaldTrump Eff all the way off, you loathesome waste of oxygen
— Mollie Katzen (@Mollie Katzen)1600480435.0

@wespearsnewsome @CollinsforGA @realDonaldTrump I just reported that tweet by Doug Collins. Everyone should report it. It is offensive.
— Macsmart3 (@Macsmart3)1600483587.0