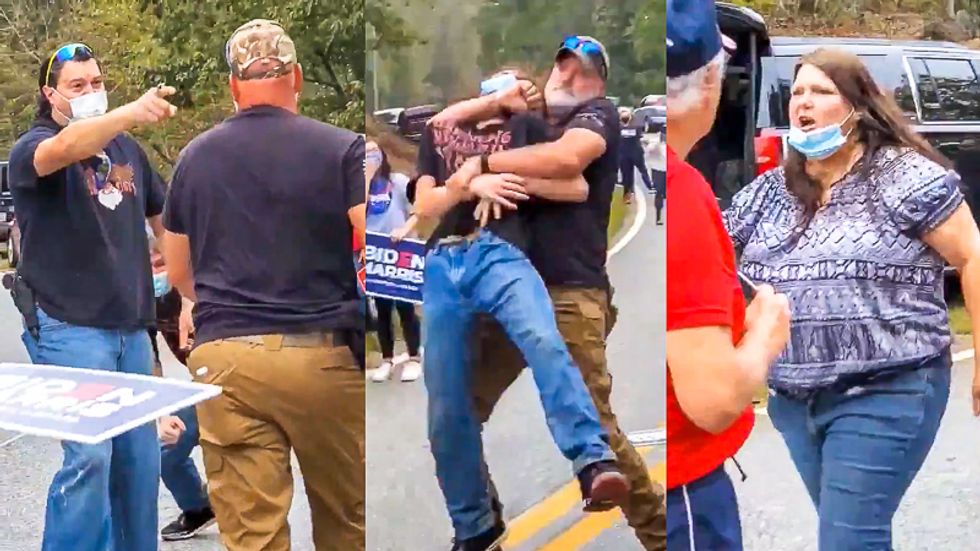 Supporters of President Donald Trump were involved in a physical confrontation with supporters of former Vice President Joe Biden outside a rally for the Democratic candidate in Warm Springs, Georgia on Tuesday.

Video of the incident was captured by Twitter user AlliB77, who describes herself as an "unapologetic conservative."

As the video begins, a Biden supporter wearing a face mask can be see charging at a mask-less Trump supporter.

An armed Trump supporter then puts the Biden supporter in a chokehold before tossing him to the ground.

At that point, an armed Biden supporter tries to break up the fight.

"I will fucking hurt you!" a woman yells.

The two armed men then square off.

"Back up!" the armed Biden supporter demands.

A woman with a Biden sign then becomes angry and claims that one of the men involved in the skirmish is autistic.

"You want to talk about my boy?" she exclaims. "You want to call my boy a retard? I will slap the god damn taste out of your mouth."

"Let me tell you something you aborted bastard," the woman adds before walking away.