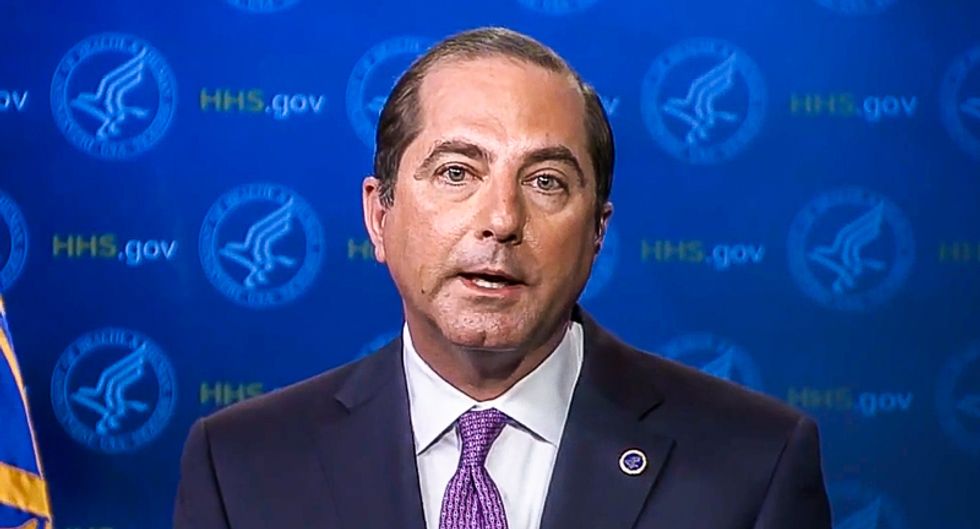 Democratic lawmakers were incredulous after Health and Human Services Secretary Alex Azar on Friday testified following President Donald Trump's Covid-19 diagnosis that the Trump family can't be expected to take the precautions that public health experts recommend, while also claiming the spread of the coronavirus to more than 7.3 million Americans is a matter of "individual responsibility."

Testifying before the House Select Subcommittee on the Coronavirus Crisis as Trump reportedly began developing Covid-19 symptoms, Azar told Rep. Nydia Velazquez (D-N.Y.) that the president's family did not wear masks at the first presidential debate last Tuesday because "the first family and the protective aspect around the president is a different situation than the rest of us."

Despite the fact that at least two members of the Trump family are now ill, Azar suggested the family is in "a protective bubble."

At the Cleveland Clinic in Cleveland, Ohio on Tuesday, a doctor was reportedly shooed away from the president's adult children when she approached them to ask them to wear face coverings during the debate.

Members of the Trump family were also present at the White House event last Saturday where Republicans celebrated the president's nomination of Judge Amy Coney Barrett to the U.S. Supreme Court, where many attendees were unmasked. The gathering is now thought to have been a "superspreader" event, with at least seven attendees having tested positive for Covid-19 on Friday, including Sens. Thom Tillis (R-N.C.) and Mike Lee (R-Utah) and former Trump advisor Kellyanne Conway.

Testifying before masked Democratic lawmakers and GOP members who declined to wear face coverings even as the number of positive Covid-19 tests on Capitol Hill grew, Azar dodged a question from Rep. Maxine Waters (D-Calif.) about Trump's recent rallies, where indoor venues have been packed with unmasked attendees in close proximity and where the president has frequently downplayed the severity of the virus.

"Do you think that the president's rallies that he has gone to where people are not social distancing...or wearing masks, does that contribute to the increase [in cases]?" Waters asked.

While assuring the congresswoman that HHS advises Americans to practice "the three W's" by wearing a mask, washing your hands, and watching your distance, Azar said people should also "evaluate [their] individual circumstances."

Azar's comments came as news spread that the Barrett nomination event may have led to several positive tests. In addition to the Rose Garden celebration at the White House, the event included an indoor gathering where attendees were also unmasked.

"You're staying at home, not seeing loved ones. Making big sacrifices for the greater good," Warzel wrote on Saturday. "But that's a *you* thing. *They* do what they want always."

Rep. James Clyburn (D-S.C.), chairman of the subcommittee, harshly criticized Azar for enabling the president to downplay the pandemic and potentially contribute to the spread of the coronavirus in an effort to appeal to voters.

"Let there be no doubt: the president's response to the coronavirus crisis has been a failure of historic proportions," said Clyburn. "Covid-19 has claimed more American lives than the battles of World War I, the Korean War, Vietnam War, Afghanistan War, and Iraq War combined. As HHS Secretary and the first Chairman of the White House Coronavirus Task Force, Mr. Secretary, you should have been at the helm of an ambitious national response. Rather than follow the science, you tried to hide, alter, or ignore the science whenever it contradicted the president’s wish to downplay the crisis for perceived political advantage."