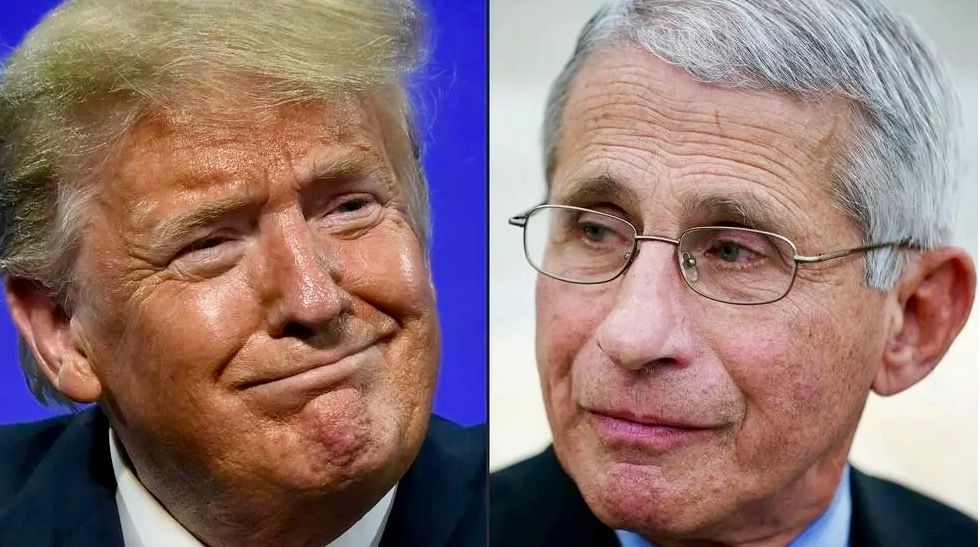 But with unrivaled credibility on the novel coronavirus that both Donald Trump and Joe Biden are eager to associate with their campaigns, the scientist is being pulled into the closing stage of their battle for the White House.

Just weeks before election day, the Trump campaign released an ad portraying Fauci as praising his actions on the pandemic. This prompted the 79-year-old doctor to issue rare public criticism of a move by the president that in turn was seized on by Biden, who has pledged to listen to his advice if elected.

Fauci, the longtime head of the National Institute of Allergy and Infectious Diseases, has become a revered figure on the left while facing widespread criticism from the right this year. US politicians from both major parties sought to make use of his reputation.

Fauci has successfully navigated this political minefield, largely avoiding direct criticism of Trump, whose relentless optimism about the coronavirus contrasts with his straight talk aimed at highlighting health dangers to the public.

The final stretch of the 2020 electoral campaign however is posing a unique challenge.

"It's frustrating to him to see himself be politicized, when he spent... 40 years not being political and trying to avoid that issue," Zeke Emanuel, chair of the Department of Medical Ethics and Health Policy at the University of Pennsylvania, told AFP.

Asked why Fauci's endorsement has been so sought after, Emanuel said: "Integrity and credibility -- it's just that simple. The man has integrity, he says what he sees in the science, and therefore he has credibility."

In the Trump ad, a narrator says that, "President Trump tackled the virus head on, as leaders should." It then cuts to a clip of Fauci saying: "I can’t imagine that... anybody could be doing more."

Fauci hit back, saying that, "In my nearly five decades of public service, I have never publicly endorsed any political candidate."

He also criticized the ad for taking his "broad statement" on federal health officials out of context -- an assertion backed up by his full remarks.

Trump campaign communications director Tim Murtaugh stood by the ad. "These are Dr Fauci's own words," he said. "The words spoken are accurate, and directly from Dr Fauci's mouth."

The dispute did not end there.

Fauci said on CNN that he thinks the ad should be pulled, while Trump referenced the doctor's errant Major League Baseball opening day pitch to criticize him on Twitter: "Tony's pitching arm is far more accurate than his prognostications."

"Biden leads Trump by double digits... in terms of who people trust to handle the coronavirus pandemic," Belt said.

Fauci has at times spoken positively about the US coronavirus response in general, and Trump's actions specifically. But he has warned of rising case numbers in recent days -- a message that runs counter to Trump's claims of successfully handling the crisis.

Regardless, the Trump campaign is using Fauci to defend the president's coronavirus record, such as with a list posted Sunday on the campaign's website that contrasts the doctor's statements with criticism from Biden.

"DR FAUCI HAS REPEATEDLY SAID THE TRUMP ADMINISTRATION DID EVERYTHING POSSIBLE TO SAVE LIVES," the list's title says.

The politicization of Fauci has also occurred on the left, though not on the same scale.

Biden has criticized Trump for allegedly not listening to Fauci. And his Democratic running mate Kamala Harris contrasted her trust in the doctor with her lack of faith in Trump when it comes to a coronavirus vaccine during the recent vice presidential debate.

Biden has also seized on the ad controversy, tweeting that, "Donald Trump is running TV ads taking Dr. Fauci out of context and without his permission."

"Here's something that will be very different if I'm president: I'll actually listen to Dr. Fauci's advice and expertise, not attack him for telling the truth," the Democrat wrote on Twitter a day later.

For Trump's team, the effort "has backfired" because Fauci pushed back, said Belt.

The political impact may be limited, he said, as most voters have probably already made up their minds on who to vote for. But it could hurt the president with those who are still undecided.

"It reinforces the notion that Trump is only interested in himself and his electoral fortunes, not the country at large, as a leader should be," Belt said.