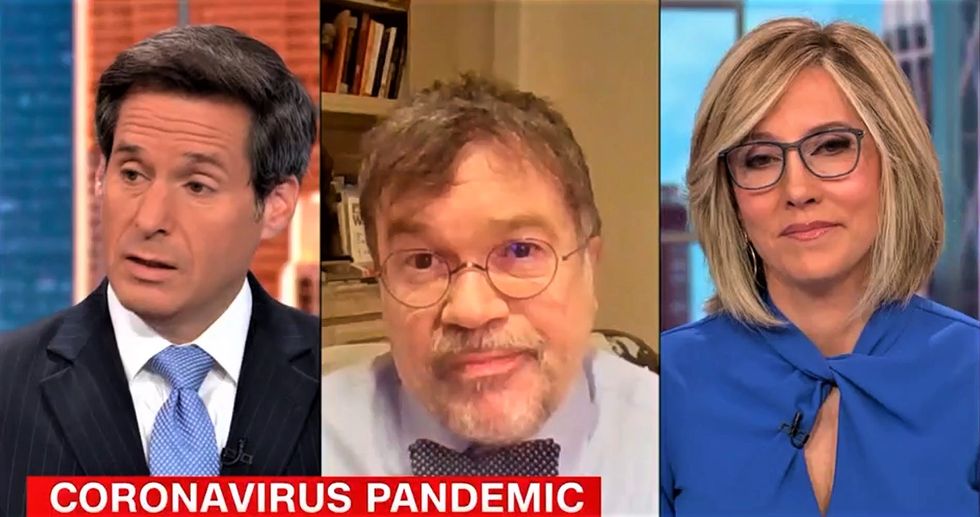 CNN hosts John Berman and Alisyn Camerota appeared unnerved after an infectious disease expert warned the country is about to experience "one of the darkest chapters in modern American history" thanks to the novel coronavirus pandemic.

Dr. Peter Hotez, the co-director of the Texas Children’s Hospital Center for Vaccine Development, told CNN on Tuesday that the next three months were likely to be absolutely horrific when it comes to Americans' health and well being.

Hotez began by offering a message of hope by saying that, by this time next year, the situation with the COVID-19 pandemic should be much more under control.

However, he warned that things in the country are likely going to get worse in the meantime.

"As bad as it's been it's about to get worse," he said. "And that's based on projections about a fall/winter surge as people are indoors more... some of the projections just awful. We could be looking at a doubling of the number of deaths a week before the inauguration. This is tough stuff."

Hotez said that the problem could get worse if Trump loses the election and then gives up even pretending to care about the virus.

"They haven't really been very involved in creating a national response to begin with, I can only imagine what it's like during that lame-duck session," he said. "So people are going to feel abandoned. They're going to feel on their own in what is going to be one of the darkest chapters in modern American history."

At this point, CNN host Berman took a deep breath and said, "It's pretty bleak."