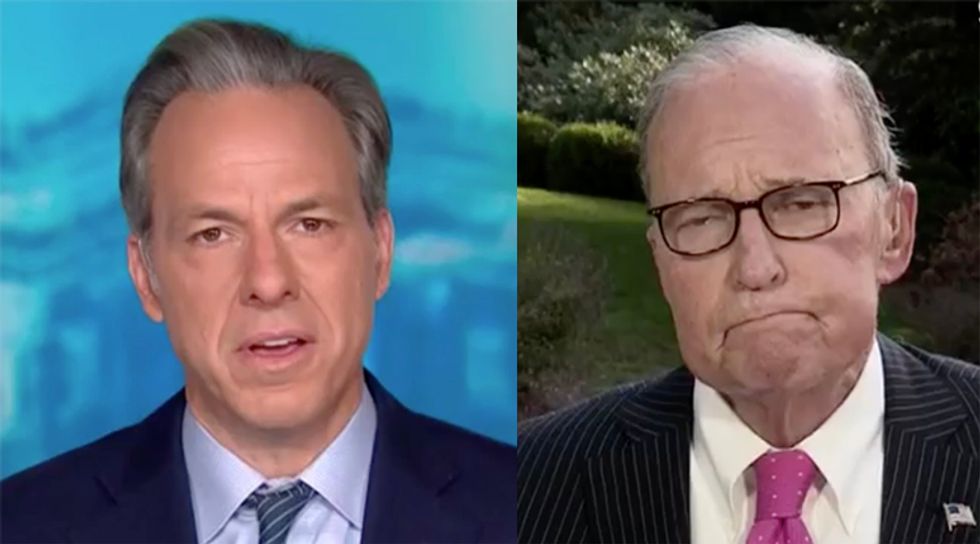 Appearing on CNN's "State of the Union," Donald Trump's economic adviser Larry Kudlow was pulled up short by host Jake Tapper for blithely stating America is rapidly moving forward because "we are learning to live with the virus," with the CNN host pointing out the growing death total.

Kudlow was appearing on CNN to discuss the debate in Congress on yet another COVID-related stimulus bill when he made the "moving forward" statement that made Tapper sit up straight.

"We are in a strong rebound," Kudlow insisted. "Lower taxes and lower regulations going way back are still in place and businesses are reopening. We are learning to deal with the virus in a targeted safe prevented way. All I'm saying is some targeted assistance goes a long way right now--."

"We are not learning with the virus, Larry!" the incredulous Tapper interrupted. "We just had four days in a row of 50,000 infections, the death rate in the highest in the world. Let's focus on your area of expertise."

"One second, Jake. I want to clarify, living with the virus," Kudlow backtracked. "Look. 5,000 experts just signed a petition led by people from Harvard, Stanford, Oxford University. These are scientists, these are doctors, health care workers who say we can deal with this virus going on while we are getting new therapies, we are getting new vaccines are coming around. It's not just living with the virus. As long as we protect the most vulnerable, as long as we preserve the key guidelines, yes, we can get through this. We are not going to shut down the whole economy. There is no reason for that. We will take care of the vulnerable -- that is the key point."

"Well, so much you just said. I had you on to talk about the economy and not health care matters. About the key guidelines, you might want to tell the guy in the building right behind you," Tapper replied while noting the White House serving as Kudlow's backdrop.