Did Florida Republican Matt Gaetz just get an illegal donation from the Trump organization? 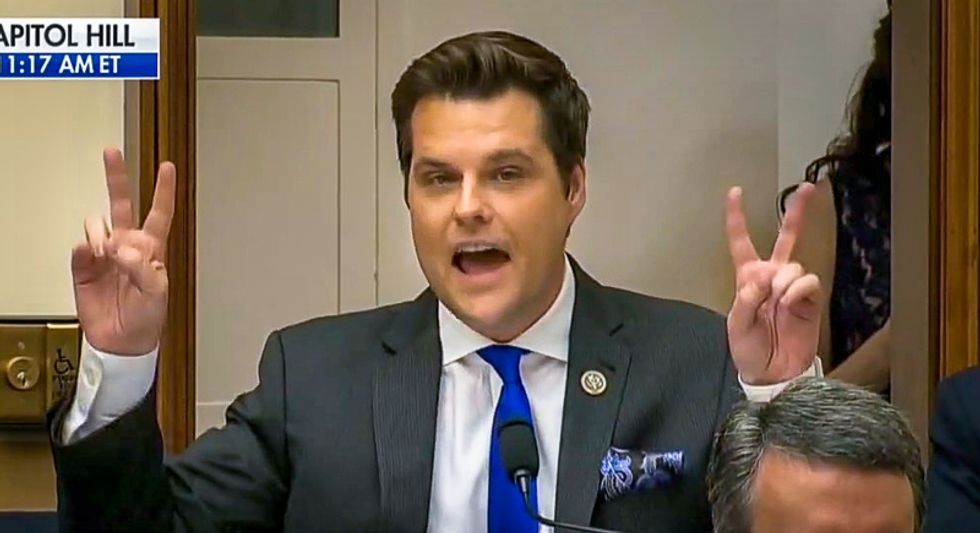 Matt Gaetz speaks to House Judiciary Committee (Fox News/screen grab)
The campaign to re-elect Rep. Matt Gaetz, R-Fla., a reliable ally of President Donald Trump, appears to have received a deep discount on lodging at Trump International Hotel in Washington during the Republican National Convention in August, federal records show. Such a discount would violate federal election law barring corporations from contributing directly to campaigns, according to campaign finance experts.

Recent Federal Election Commission (FEC) filings show the Gaetz campaign made four separate payments, ranging from $216.20 to $261.47, for lodging at Trump's hotel on Aug. 27, the last of four nights of the convention when Trump gave his acceptance speech from the White House lawn.

On that evening, the price for rooms for one adult through Hotels.com began at $795 and ran as high as $2,070, The Daily Beast reported. On the three convention dates prior to Trump's keynote address, the hotel priced its cheapest room at $695 a night. (Rates for rooms this week range from $695 to $895.)

It appears the hotel cut the Gaetz campaign a discount far below market rates. Even if the campaign had booked the cheapest room available, it appears to have paid about one-third of the market rate, saving anywhere between $470 and $530. Such a discount would represent an in-kind donation to the Gaets campaign, courtesy of Trump Old Post Office LLC. (The FEC treats any item of value as money.)

A photo of Gaetz at the hotel alongside White House chief of staff Mark Meadows and New Jersey convention delegate Joseph Belnome was posted to the latter's Instagram page on the day of the hotel payments.

Corporate contributions to candidates are illegal under federal election law. It is also illegal for companies to cut campaigns a special deal not given to other customers. When campaigns pay below normal prices, they must report the discount as a contribution. Per the Federal Election Commission:

[A]nything of value made by any person for the purpose of influencing any election for Federal office is a contribution . . .

The Gaetz campaign did not report a discount in its latest filing.

While it is possible that the Gaetz campaign booked the rooms in advance, it is unlikely to have made much of a difference. First, the reservations were unlikely to have been made with much advance notice. Trump, who canceled his previous plans to accept the nomination in Jacksonville, Fla. — itself a back-up to the original location of Charlotte — was still weighing in early August whether to give his speech from the White House or Gettysburg, Penn. Plans for the D.C. portion of the convention were not announced until Aug. 13.

Even if Gaetz — who recently accused Sen. Kelly Loeffler, R-Ga., of trying to bribe Trump for his support — was given an early heads-up, he may not have been alone. Everson, an independent journalist who reports extensively on the Trump Hotel, first noticed the price hike on Aug. 6. If Gaetz somehow had the foresight to book the rooms months in advance, the rates would still be improbably low, according to Everson.

As the Trump hotel reportedly hiked its prices, other luxury D.C. hotels were cutting their rates. Accommodations for single adult rooms on Aug. 27 started at $367 at the Mandarin Oriental and $263 at the Fairmont Washington, the Daily Beast reported on Aug. 6.

Trump's 2020 financial disclosures show the president made $40.5 million last year from the luxury hotel, which occupies the federally-owned Old Post Office building. The government controls the Trump Organization's lease, which the company has sought to offload.

Gaetz, one of the president's most ardent supporters, recently appeared at a Trump campaign rally in his home state of Florida, where the president repeatedly called him "Rick."

Jordan Libowitz, of Citizens for Responsibility and Ethics in Washington, which also noted the disbursements, told Salon that a steep discount for Gaetz would not surprise him.

"Gaetz is particularly close to Trump and has been to Trump properties more than any other Representative — tied with Kevin McCarthy," Libowitz said. "But he's still behind Senators Lindsey Graham and Rand Paul."

"So how he got a discount is really a question he'd need to answer," Libowitz added, pointing out that standard room rates at the hotel range from the high-300s to mid- to high-400s.

The deal echoes another scandal centering around Gaetz from earlier this year, when the Office of Congressional Ethics (OCE) probed nearly $200,000 in taxpayer funds that the panhandle conservative paid over the years to a campaign donor to rent the entire sixth floor in a historic building in downtown Pensacola. Watchdogs considered the price to be below market rate.

The OCE ended its investigation in early July without reporting any wrongdoing. Gaetz' campaign reported a $3,786 payment on Sept. 4 to the law firm he tapped during the inquiry, according to his FEC filings, or one week after his hotel stay.

While it is unclear what that payment concerns, Politico reported in late July that Gaetz appeared to have violated House ethics rules after funneling taxpayer money to Darren Beattie, a consultant and former Trump aide. Beattie was ousted in 2018 after it was revealed that he had spoken at a conference featuring prominent white nationalists.

Gaetz and the Trump International Hotel did not reply to Salon's request for comment.