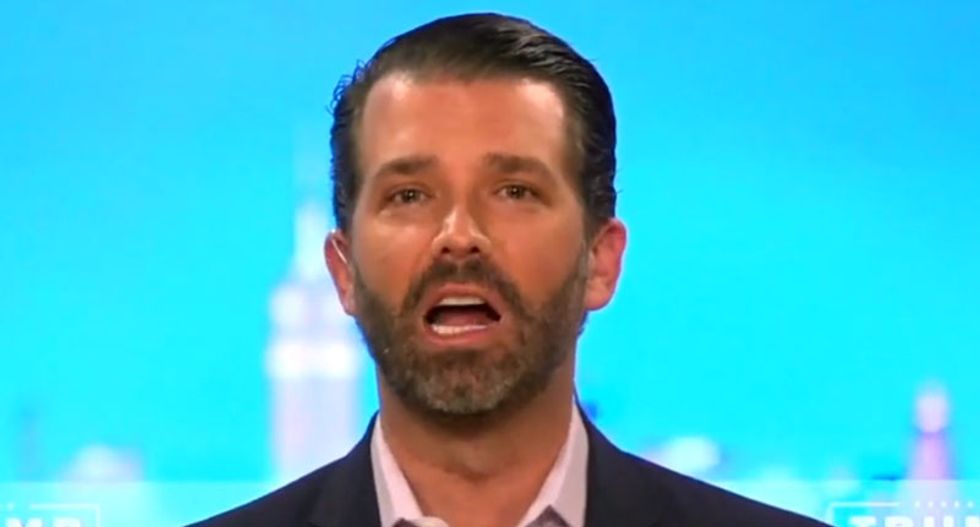 Donald Trump Jr. claimed House Speaker Nancy Pelosi (D-Calif.) has "substance issues" as he fired back at her for her latest criticism of his father, President Donald Trump.

During an appearance on Fox News, Trump Jr. was asked to weigh in on Pelosi's criticism of the president's decision to abruptly and unilaterally end negotiations for the next stimulus bill. More specifically, the president's son was asked about his reaction to Pelosi raising concerns about whether or not Trump is mentally capable of making such critical decisions since he is said to be on antiviral medications and steroids due to complications of coronavirus.

According to Trump Jr., Pelosi has "her own substance issues" although he offered no specific details about the allegation. He continued by echoing more baseless claims repeatedly perpetuated by his father.

"Nancy has her own substance issues according to the press and according to the media," Trump Jr. said. "I won't get into that. It's obviously nonsense. The reality is this: Nancy Pelosi was trying to stack literally, probably a trillion dollars of excess nonsense to bailout Democrat cities, to push for cashless bail, to get illegal immigrants stimulus checks as part of that package while the American taxpayer gets to foot the bill for her radical agenda."