Donald Trump Jr. brutally mocked for claiming he had to 'work my way up' at his dad's firm 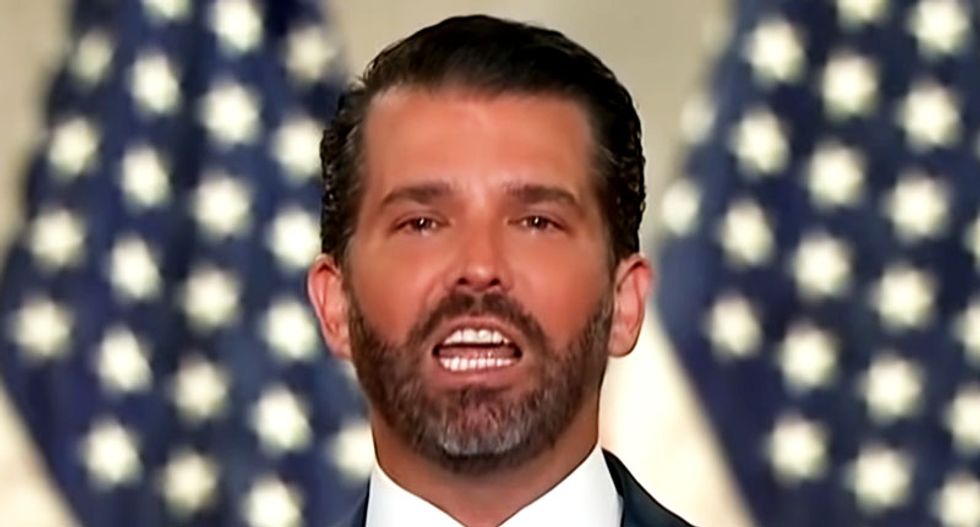 Donald Trump Jr. on Thursday drew quick ridicule for trying to portray himself as a scrappy go-getter despite the fact that he was born into wealth and literally works for his father's company.

The eldest Trump son tried once against to attack Hunter Biden by claiming that the Democratic presidential nominee's son had everything handed to him.

"My father gave me an opportunity to work my way up in his company," Trump Jr. wrote. "Joe gave his son China."

Given how Trump Jr. would not be where he is today without his famous father, his latest tweet attacking Joe Biden's son was instantly mocked for its complete lack of self-awareness.

@DonaldJTrumpJr @BorisEP He barely wanted to give you his name, and his abuse and/or neglect obviously had more of… https://t.co/rFLfzqKTTo
— Nick Wett (@Nick Wett) 1603375033.0

@DonaldJTrumpJr You are obsessed with Hunter Biden. I’m so sorry you never received the love from your own father you so desperately need.
— jen pal (@jen pal) 1603375306.0

@DonaldJTrumpJr You’re jealous of the Biden’s bc you know their father loves them
— Christine Galea (@Christine Galea) 1603375164.0

@DonaldJTrumpJr You have never received a paycheck that daddy didn't sign! EVER!
— robert emmett (@robert emmett) 1603374898.0

If one thing did in Stewart Rhodes, the Oath Keepers founder who was found guilty today of seditious conspiracy for his role in the Jan. 6 insurrection, it was his decision to testify on his own behalf.

Rhodes was on trial with four other Oath Keepers. Kelly Meggs, a member of the far-right militia, was found guilty of seditious conspiracy, while the other three were acquitted of that charge. All five were convicted of obstruction of an official proceeding and aiding and abetting.