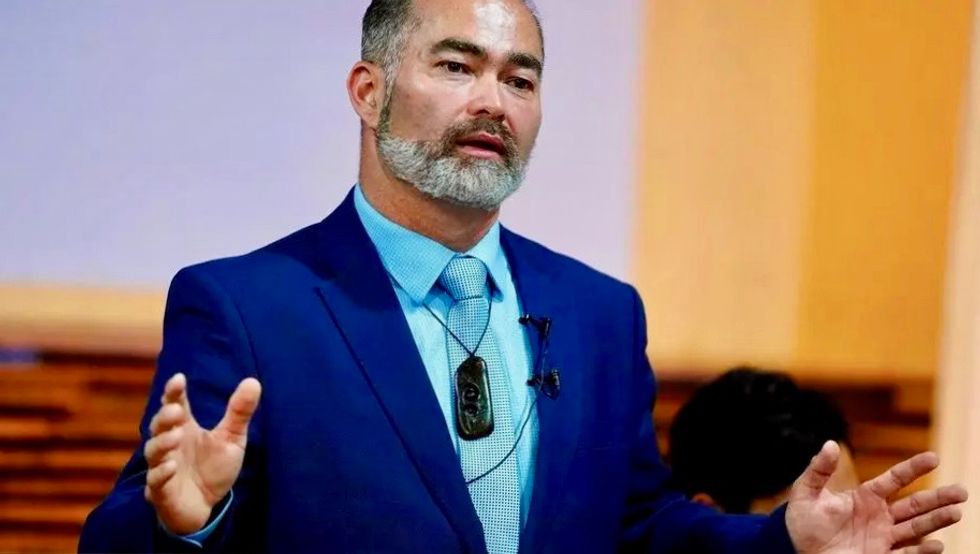 Social media posts from Billy Te Kahika, one of the leaders of the the Advance New Zealand party, claim Covid-19 is fake and part of a conspiracy to enslave people Diego OPATOWSKI AFP/File

Facebook shut down the page of conspiracy-embracing political party Advance New Zealand on Thursday just two days out from a general election, accusing it of spreading misinformation about the coronavirus.

The action against a registered political party in the midst of an election campaign is unprecedented in New Zealand and comes as Facebook shows an increased willingness to act against false claims made on the social media giant.

"We don't allow anyone to share misinformation on our platforms about Covid-19 that could lead to imminent physical harm," a Facebook spokesperson told AFP, accusing Advance New Zealand of "repeated violations" of that policy.

"Facebook have now officially interfered with the New Zealand 2020 elections," he said after hurriedly posting a live video to his personal Facebook page.

"They did it in the middle of a broadcast and it's unbelievable, guys. This is amazing... they've actually carried through with the threat."

Facebook has been criticised in the past for taking a hands-off approach to dealing with falsehoods published on its platforms.

But in recent weeks, the Mark Zuckerberg-headed company has clamped down on misleading political claims, fake accounts pushing partisan agendas and hate speech such as Holocaust denial.

Addressing its move against Advance New Zealand, it said policies on coronavirus misinformation would be enforced "regardless of anyone's political position or party affiliation".

Te Kahika has amassed a huge following using the online platform, spurring him to enter politics.

The former blues musician's social media videos claiming the Covid-19 pandemic is fake and part of a conspiracy to enslave people became wildly popular since he began posting them earlier this year.

They are stunning figures for a new political entrant in a nation of just five million people.

Advance NZ's posts have been shared 148,000 times, compared with fewer than 110,000 combined for the mainstream parties, according to the CrowdTangle data.

However, the huge online presence does not appear to have translated into votes, with an opinion poll released Thursday putting Advance NZ's support at just one percent.

AFP fact-checkers have debunked two of the party's most popular claims: that the government was authorising the military to enter private residences and planning forced vaccinations.

The latter claim was made in a campaign video that selectively edited statements from lawmakers, resulting in parliamentary authorities condemning "blatant doctoring" of footage and demanding it be taken down.

Te Kahika accused Ardern, who is expected to win Saturday's election due largely to her government's success containing coronavirus, of being behind Facebook's decision to remove the page.

"This is not North Korea, this is not China, but the way this government's behaving you'd think it is," he said.

"This is war," Te Kahika raged, as his supporters vented their anger online.

"They did this to Trump, you're both a threat to the establishment," commented one, while another said "the more they fight you, the more credible they make you".