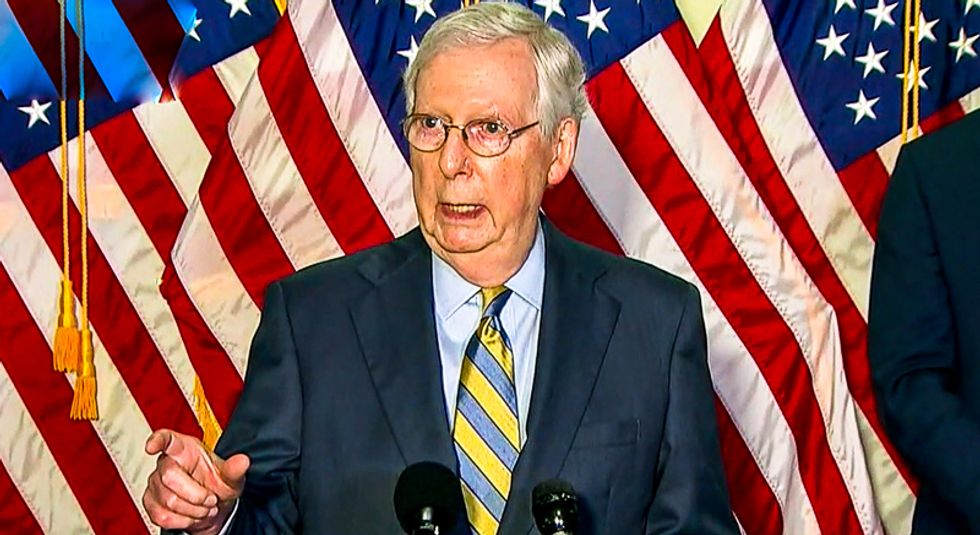 On Saturday, The New York Times reported that Senate Republicans are increasingly worried the last-minute explosion of campaign spending against them could be the final straw that wipes out their majority and gives full control of Congress to Democrats.

"As the race entered its final days, Republicans led by Mitch McConnell, the majority leader, were being forced to shore up candidates in traditionally safe locations such as Alaska, Kansas and South Carolina," reported Carl Hulse. "Democrats believe they are already on track to win Arizona and Colorado and are on the hunt for a half-dozen others starting with Iowa, Maine and North Carolina. Georgia is suddenly looming as a real opportunity for Democrats, with both of the state’s Republican senators at risk."

Republicans, meanwhile, are only favored in one race with a Democratic incumbent: Alabama, where Sen. Doug Jones won a shocking upset in the 2017 special election after several women accused Republican Roy Moore of being a child molester. Beyond that, the only other competitive Democratic-held Senate seat is Michigan, where veteran John James is challenging Sen. Gary Peters, but polls have overwhelmingly showed Peters ahead.

Both parties broadly agree Democrats will gain seats — the question is whether they will gain the net three seats required to win a majority, or four if President Donald Trump wins re-election.

"[Democratic leader Chuck] Schumer called the battle for the Senate a 'nail-biter,' but said the outlook for Democrats was far brighter than it was only a few months ago," said the report. "Republicans quietly agree that their prospects have dimmed considerably. One Senate Republican leader said privately that the party could end up with anywhere from 47 to 52 seats. 'It is a 50-50 proposition,' said Mr. McConnell, Republican of Kentucky, who appears to be safely headed toward re-election himself, about his chances for remaining majority leader. 'We have a lot of exposure. It is a dog fight out there.'"

In some of the races, pro-GOP Senate ads are reduced to warning voters that a loss in their state could be decisive for their majority.

This strategy is on full display in Montana, said the report, where Sen. Steve Daines is challenged by outgoing Democratic Gov. Steve Bullock. A recent National Republican Senatorial Committee ad there warned, “Steve Bullock in the Senate puts Chuck Schumer in charge. Think about that.”