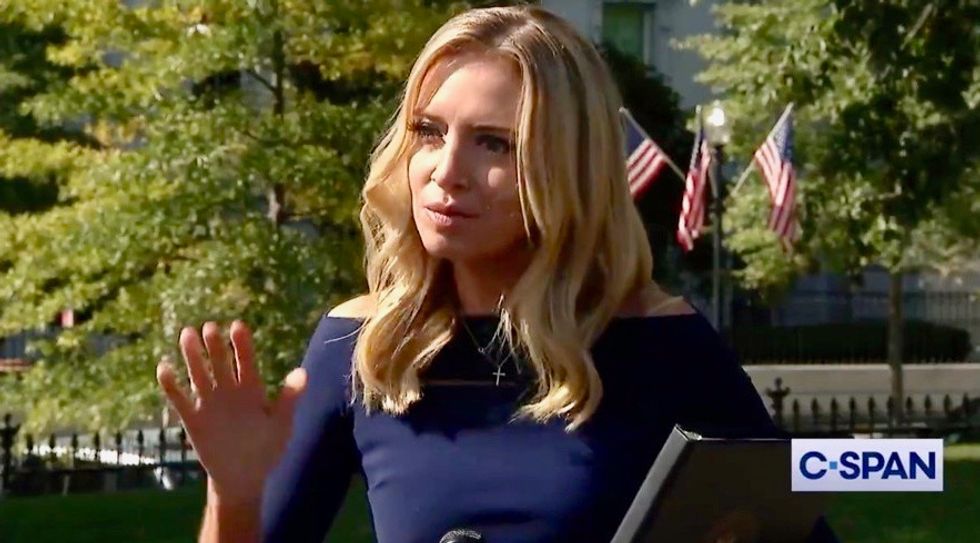 Speaking with CNN, multiple members of the White House press corp vented frustration and anger with press secretary Kayleigh McEnany for knowingly -- or unknowingly -- exposing them to COVID-19, saying she has been reckless and uncaring about their health.

With the announcement that the combative McEnany has joined the long list of White House officials who have tested positive with the coronavirus that sent Donald Trump to Walter Reed Medical Center, reporters admitted that they are no longer comfortable covering her, with one remarking that they would be safer working in North Korea.

Summing up the general mood among the reporters when it comes to McEnany, one reporter stated, "Kayleigh has so many people f*cking furious, it's hard to overstate it. She recklessly endangered the lives of the people she is tasked to work with," before adding, "I really think she owes an apology to the people who were in the briefing room on Thursday,"

Others echoed that sentiment, with one remarking, "People are angry. It's recklessness out here."

"Reporters have long voiced concerns about the cavalier attitude the White House has taken throughout the pandemic, flouting basic health guidelines as the coronavirus surged through the United States, claiming more than 200,000 lives. Trump has continued, for instance, to hold large indoor rallies during the pandemic and top officials have refused to wear masks," CNN reports. "But over the past week, the exasperation has hit a crescendo. Even after President Donald Trump and several of his top aides tested positive for the virus, the White House still declined to adopt many of the rudimentary health guidelines it recommends to the public."

According to one White House correspondent, "It's not just frustrating, it's infuriating. As White House reporters we put our health at risk every day. We have families of our own. We expect people working at the same facility as us to take the same measures. But they don't and because of this recklessness we are more worried than ever about our health."

Another added, "It's not a safe place to work and hasn't been in a long time."

"They don't wear masks," they elaborated. "They clearly haven't cared as much as they should have for seven months -- large meetings, large rallies, large everything. No masks on planes. Inconsistent testing. Every life reliant on a rapid testing system that doesn't really work. And they have mocked and attacked us for pointing that out repeatedly."

"Frankly, it's not a safe place to be," another added.