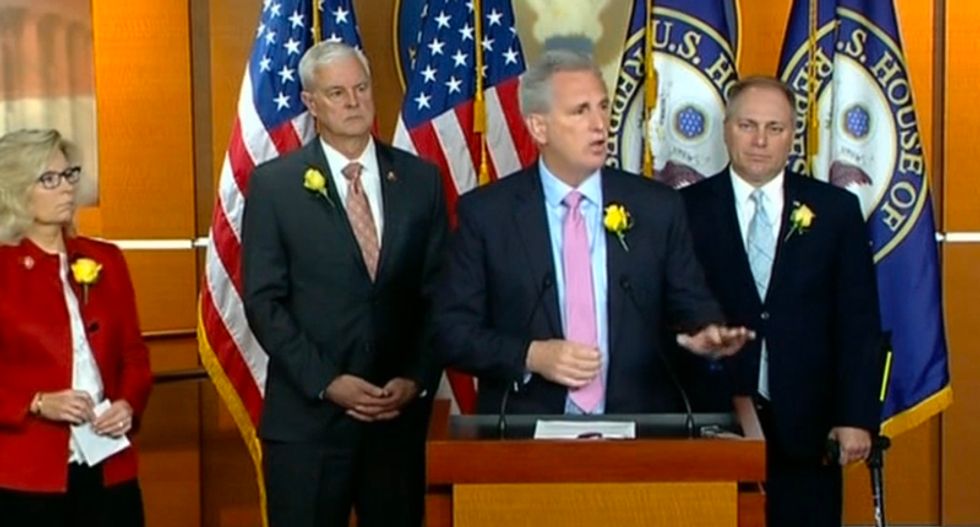 Any hopes that Republicans had that they might reclaim House seats lost in the 2018 "blue wave" election, which led to the losing control of the chamber, are quickly dissipating three weeks before the election.

According to a report from Politico, Republicans went into the 2020 election hoping to pick up seats, figuring a strong economy under Donald Trump would held them challenge some of the 40 Democrats who were swept into office in previously Republican districts. But that was before the country was slammed by the coronavirus pandemic on Donald Trump's watch which has now put the president on the road to defeat.

As the report notes, six seats taken by Democrats in 2018 were considered vulnerable but no longer.

Calling those seats "the lowest of low-hanging fruit for Republicans," Politico's Ally Mutnick writes, "But most private and public surveys from both parties show either dead heats or the Democratic incumbent with a modest lead, a startling position for a crop of candidates running in Trump country. The seats were won in 2018 by Reps. Kendra Horn (D-Okla.), Joe Cunningham (D-S.C.), Max Rose (D-N.Y.), Xochitl Torres Small (D-N.M.), Anthony Brindisi (D-N.Y.), Ben McAdams (D-Utah) and Abigail Spanberger (D-Va.)."

"Republicans' outlays against a handful of the most beatable Democrats have hampered their ability to craft a serious path back to the majority. Democrats have seized on their cash advantage to contest districts in deep-red territory, forcing the GOP to retrench and protect incumbents and open seats," Mutnick wrote.

According to Abby Curran Horrell of the House Majority PAC, "We’re able to flip the tables and focus on expanding the map. And I do think that that’s a shift. They are tied down in districts that I think they expected that they would be able to win easily. But it is not that type of year."

Looking at one House seat in Oklahoma that should be obtainable, former Oklahoma state GOP chair Chad Alexander lamented, "If we don’t win Congressional District 5, there’s probably a lot of other places we don’t win. So that would be a very bad night for Republicans."