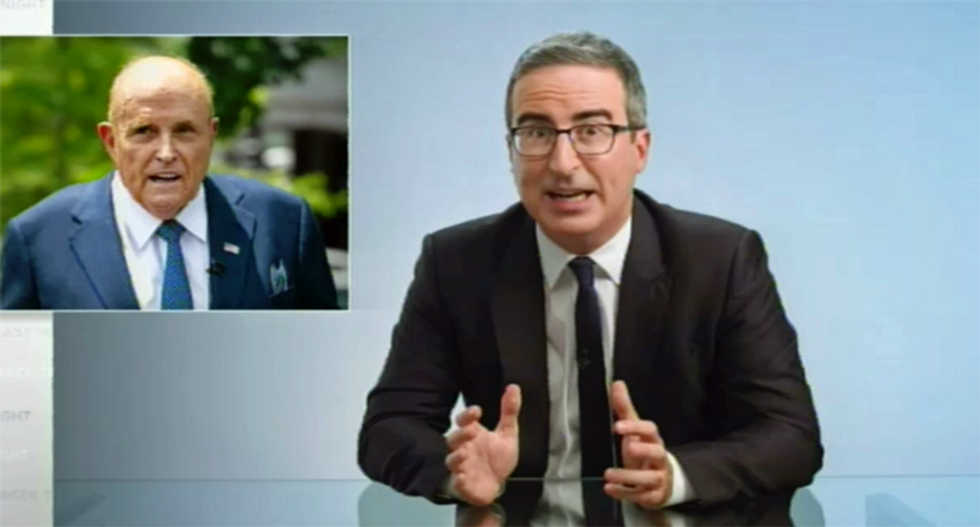 John Oliver broke down all the catastrophes plaguing President Donald Trump 2020 re-election campaign, with a special focus on the efforts led by Rudy Giuliani to spread conspiracy theories about Hunter Biden.

On HBO's "Last Week Tonight" on Sunday, Oliver looked at the efforts to smear Joe Biden over his son Hunter.

"If you're trying to figure out what the f*ck they're talking about there," he said, referring to the Fox News view, "it revolves around emails and text messages supposedly recovered from a laptop belonging to Hunter Biden."

"But there are a lot of red flags here," Oliver noted. "Including the fact the NY Post story that broke was reportedly written mostly by a staff reporter who refused to put his name on it and the laptop's conduit to the press is Rudy Giuliani, who intelligence officials flagged last year to be the target of a Russian intelligence operation to feed misinformation to Trump."

"And Giuliani's ability to spot fraudulent information is at best, not great," he noted. "He's so technologically illiterate he has butt-dialed a reporter and left and accidental voice mail -- more than once. And he recently accidentally uploaded video of himself affecting a stereotypical Chinese accent and just this week it emerged he has a cameo in the upcoming Borat film."

After making a cousin marriage joke, Oliver returned to the subject of the conspiracy theory.

"But the point is, any information that Giuliani is passing on should be treated with extreme caution," he counseled.