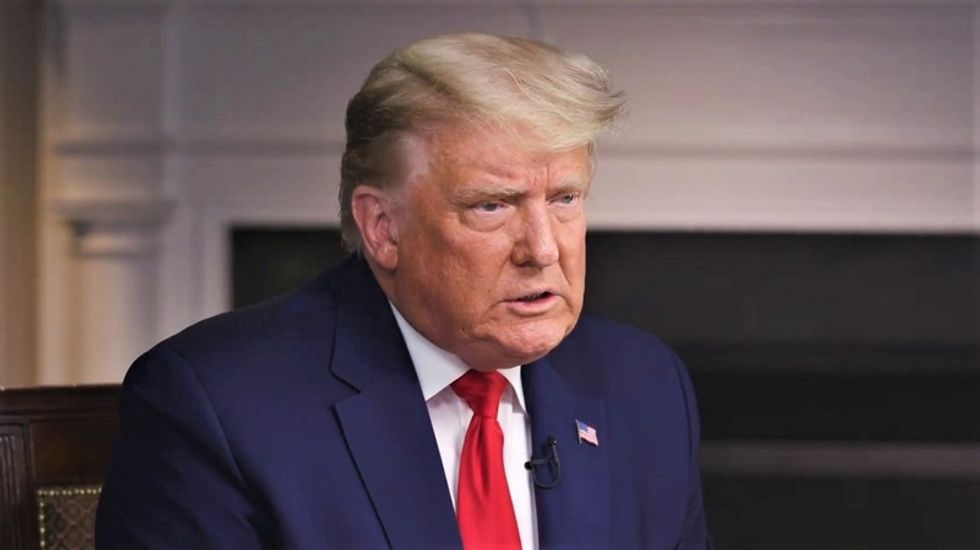 President Donald Trump on Thursday released his long-awaited interview with "60 Minutes" journalist Lesley Stahl, and it did not go well for him.

During the 37-minute interview posted by the president, he made a number of blunders on topics ranging from the coronavirus pandemic to the state of the Affordable Care Act to the news media, which he frequently accused of being "corrupt."

Below are the biggest mistakes Trump made during his lengthy interview.

1.) Trump starts off the interview by telling Stahl that he doesn't want to deal with tough questions.

Before the interview begins, Stahl can be heard asking, “Are you ready for some tough questions?”

“Just be fair,” the president responded.

“But last time [I interviewed you], I remember you saying to me, ‘Bring it on,'” Stahl replied.

“You’re going to get fairness,” she said. “But you’re okay with some tough questions?”

“No,” the president replied. “You don’t ask Biden tough questions!”

2.) Trump insists that America has "turned the corner" on the COVID-19 pandemic even though new cases and hospitalizations are both surging.

Stahl asked the president about the dozens of times he has said that the novel coronavirus would soon "disappear" or "go away," and the president once again made a rosy prediction about his handling of the disease.

"We have turned the corner," Trump said.

"People can see cases going up," Stahl shot back. "In the Midwest, in the Mountain West, record numbers."

According to data published by the New York Times, the number of COVID-19 cases has increased by 32 percent over the past two weeks, while deaths have increased by 9 percent.

So far, more than 220,000 Americans have died from the disease in just eight months.

3.) Trump admits that he wants the Supreme Court to kill Obamacare -- then acknowledges he still hasn't finished writing up a replacement plan.

In one particularly damaging part, Stahl grilled the president about his hopes about the United States Supreme Court striking down the entire Affordable Care Act.

"And if they end it..." Stahl interjected.

"Because we will come up with a plan..." Trump began.

"Will!" said an incredulous Stahl, as earlier in the interview Trump said his plan was already done.

"Yeah, we we will," Trump replied.

"But you said you already..." Stahl began.

"We have large sections of it already done," he said.

4.) Trump accuses Stahl of peddling "fake news" when she accurately quotes him.

Stahl at one point in the interview quoted the president's plea during a campaign rally when he said, "Suburban women, will you please like me?"

"No I didn't say that!" Trump said, even though that was an exact word-for-word transcription of what he said. "You know, I say it jokingly: Suburban women, you should love me because I'm giving you security and I got rid of the worst regulation!"

Then, despite acknowledging that Stahl had quoted him accurately, he proceeded to call her "fake news."

"The way you said that is why people think of you and everyone else as fake news!" he said.

5.) Trump storms off the interview because Stahl asked him tough questions.

“No, no, listen, your first statement to me, ‘This is going to be tough questions,'” Trump said. “Well, I don’t mind that. But when you set up the interview you didn’t say that.”

The president walked away from the interview shortly after.