'If Trump loses, the Supreme Court needs to call a new election': Trump supporters unwilling to accept a Biden win 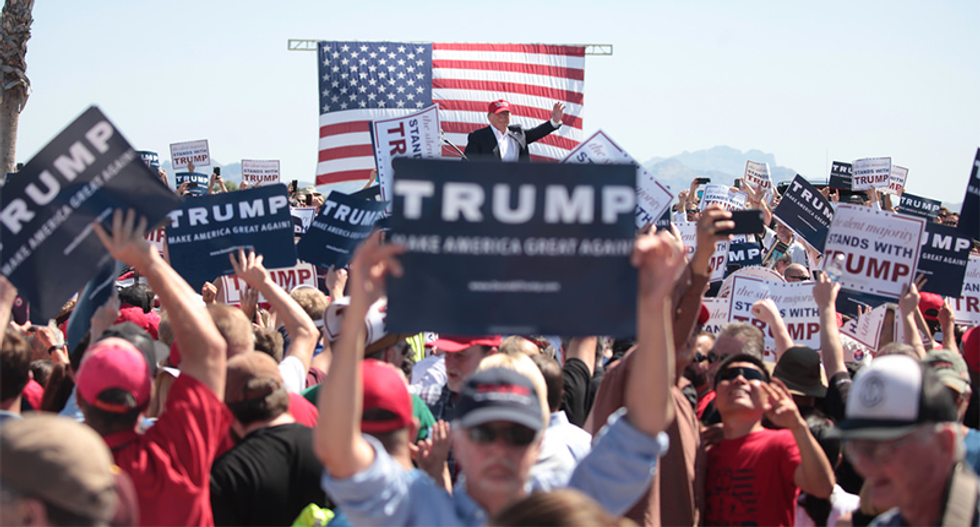 In a deep dive into the growing mistrust of the American voting system that has exploded under Donald Trump, fans of the president told Politico that they see no way that the president could lose on election day unless he was cheated out of it.

Focusing on Luzerne County in battleground Pennsylvania, which became the focus of a national debate about mail-in voting after nine ballots were thrown away by a volunteer --which was jumped on by supporters of the president to make their case -- some Trump supporters claimed the incident only reinforced their belief that the election is being rigged against the sitting president.

As Politico's Tim Alberta wrote, "Nobody here knows exactly how a call about nine discarded ballots that were recovered by the office boss turned into a press release from the Department of Justice; the U.S. Attorney’s Office did not respond to my request for comment. But the sudden escalation of events, and the extraordinary unmasking of voters’ ballot preferences, made for a media feeding frenzy. Local and national news swarmed over the story, the coverage blowing wildly out of proportion the events that occurred—which, in retrospect, seemed to be the point."

According to Kathy Bozinski, chair of the Luzerne County Democrats, the way the Justice Department quickly became involved in a minor glitch was a tip-off to how the Trump administration is stoking paranoia about the election.

“I was a journalist here for many years. I saw a million press releases from the Middle District office, and there was never a single good detail you could pull out of them. Those statements were always so vague that it made you crazy,” she explained.

With the president telling reporters, "They’re sending millions of ballots all over the country. There’s fraud. They found them in creeks. They found some—just happened to have the name Trump—just the other day in a wastepaper basket. They’re being sent all over the place. This is going to be a fraud like you’ve never seen,” supporters of the president are echoing his sentiments.

In an interview with Politico, one supporter of the president claimed he doesn't see any way that Democratic challenger Joe Biden can win without cheating.

“If Trump loses, the Supreme Court needs to call a new election. They should investigate all these ballots that have been thrown out and give him four more years on that basis alone. They’re trying to cheat him out of office,” complained Frank Kibler, a 51-year-old Trump supporter.

Pointing to the office where the ballots were thrown out, he stated, "Don’t tell me they didn’t throw them away on purpose. The ballots were for Trump, and they don’t want Trump getting reelected—it’s as simple as that," before adding, "There’s obviously someone in that office who doesn’t like him, and they’re trying to stop him. It’s nothing new—same thing that happened with Russia, and the whole Mueller investigation, and then the impeachment thing. This is just the latest way to try and cheat him out of the job.”

Kibler's comments were echoed by Lynn Bartz, the district chair of the local GOP, who also cited the ballot issue that was later dismissed as a minor incident that was caught early because the system worked.

"I’m sorry, but it was no accident. It was on purpose. We all know that," she stated. "It’s the way they’ve been playing this game, the way they’ve been trying to set up Trump since day one. Whether it was Russia, or the impeachment, or now Covid, it keeps on coming. And now they’re trying to beat him any way they can.”

Pressed on whether Biden -- who has a comfortable lead in most national polls could actually be the frontrunner -- Bartz dismissed it out of hand.

“No. I don’t think there’s any possibility that President Trump can lose fairly,” she replied. “If he loses, it’s because he was cheated. I’m sorry. That’s just what I believe.”

She went onto add she believed that vote counting in the past was above-board, but it has changed with the advent of mass mail-in voting.

“Obama won fair and square, but that election was held under the old rules,” she explained. “This new way of voting, all these mail ballots, I don’t trust it. You don’t know where they are coming from and who’s filling them out.”