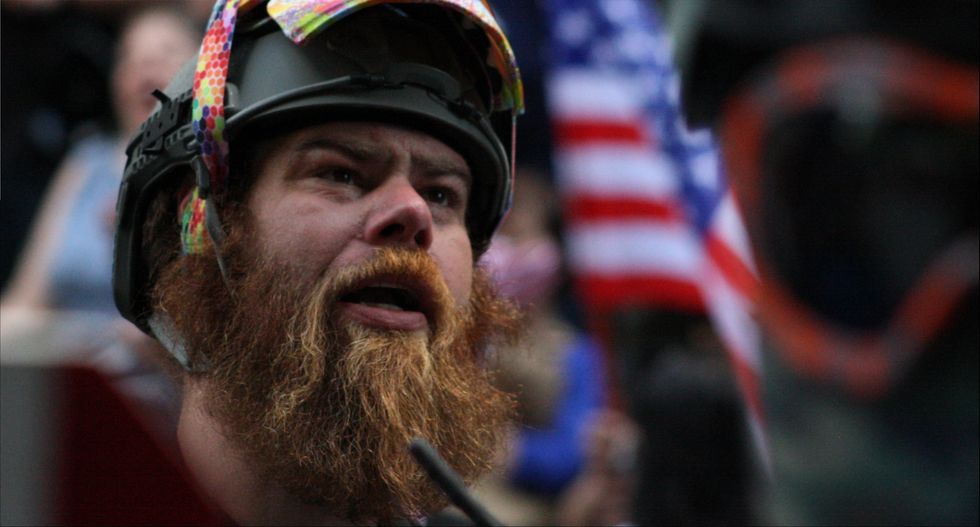 Portland, Oregon/United States-August 22, 2020: Conservative people from the far right movement, Proud Boys, and Boogaloo join for a "Back the Blue" rally.

Four months after calling on President Donald Trump to stop stoking the flames of civil unrest over racial injustice, the International Crisis Group again on Wednesday departed from its usual work of reporting on conflicts and war zones in developing nations, and issued its first-ever report on fears of violence surrounding the U.S. presidential election.

Robert Malley, president and CEO of the ICG, called the organization's report, advising U.S. and world leaders on how to avoid election-related unrest and violence in the wealthiest country in the world "an extraordinary step."

.@crisisgroup takes the extraordinary step of issuing a report about how to avoid election related violence in the… https://t.co/x15MOFPcgM
— Andrew Hudson (@Andrew Hudson)1603905376.0

The report warns that "the ingredients for unrest are present" in the United States and puts the onus for that squarely at the feet of the president and his right-wing supporters.

"Beyond the implications for any Americans caught up in unrest, the election will be a harbinger of whether its institutions can guide the U.S. safely through a period of socio-political change. If not, the world's most powerful country could face a period of growing instability and increasingly diminished credibility abroad."

"President Donald Trump's often incendiary rhetoric suggests he will more likely stoke than calm tensions," the report reads, warning that how other U.S. leaders respond to the potential violence could determine what happens next in the country.

"Beyond the implications for any Americans caught up in unrest, the election will be a harbinger of whether its institutions can guide the U.S. safely through a period of socio-political change," the ICG said. "If not, the world's most powerful country could face a period of growing instability and increasingly diminished credibility abroad."

The report calls for leaders in both the Democratic and Republican parties to make clear that a clean and free election is the top priority on both sides of the aisle.

As it stands, Democratic leaders in recent months have pushed for legislation to fund the U.S. Postal Service to make it possible for Americans to vote by mail as well as $3.6 billion in funding for state and local governments to administer elections safely.

Senate Majority Leader Mitch McConnell (R-Ky.), however, has dismissed those proposals as "an unserious liberal wishlist" while other GOP leaders have severely hampered voters' ability to cast their ballots in states including Texas and Alabama, suggesting election integrity is a pet cause of only one political party.

Without bipartisan calls for a fair election in which all votes are tallied, the ICG suggests, the Republican Party will be offering tacit approval to the president's claims that Democrats have rigged the election if he loses.

"If events take an ugly turn, both domestic political and foreign leaders with easy access to Trump and his inner circles should tell them privately and publicly that they will have no support if they try to interfere with tabulation of results or, should they lose, the peaceful transfer of power," the ICG wrote.

While the U.S. has for decades branded itself as an international authority on free elections, the report asks foreign leaders to "press U.S. counterparts to respect democratic norms."

The report details Trump's refusal to condemn right-wing white supremacist groups like the Proud Boys, who MilitiaWatch and the Armed Conflict Location & Event Data Project (ACLED) identified in a study last week as having a "very high" potential for perpetrating violence after the election. The president publicly called on the group to "stand back and stand by" rather than telling them to "stand down" at the first presidential debate in September, the same event in which he called on his supporters to "watch" the polls.

The ICG warned that in the past, white supremacist and extremist groups "appear to have listened to [Trump's] words carefully":

In 2019, when the president tweeted out comments from right-wing pastor Robert Jeffress suggesting that Trump's impeachment and removal would cause a "Civil War-like fracture in this nation," the Oath Keepers militia responded with a commitment of sorts. "All he has to do is call us up," the organization posted on its account, adding, "We WILL answer the call."

In recent days, the president has encouraged right-wing ire against Michigan's Democratic Gov. Gretchen Whitmer, who was the victim of a foiled kidnapping plot by a group known as the Wolverine Watchmen, several of whom were arrested earlier this month by the FBI. At recent rallies Trump's supporters have repurposed their "Lock Her Up!" chant, originally directed at Hillary Clinton in 2016, for Whitmer. At a rally in Lansing, Michigan on Tuesday, the president said of the kidnapping plot, "Maybe it was a problem, maybe it wasn't."

To avoid violence by the armed groups Trump has aligned himself with, the ICG said, U.S. officials must commit to "reinforcing the guardrails" protecting democracy.

"Domestic officials at every level of government, foreign leaders, traditional and social media, and civil society should be guided by the principle that the more that U.S. voters believe that they are participating in a clean and inclusive election, the less cause they will have to turn their frustrations against the system and each other." —International Crisis Group

"Domestic officials at every level of government, foreign leaders, traditional and social media, and civil society should be guided by the principle that the more that U.S. voters believe that they are participating in a clean and inclusive election, the less cause they will have to turn their frustrations against the system and each other," wrote the group. "Identifying and moving quickly to address legitimate causes of potential friction and grievance among voters should therefore be the top priority."

Election officials must counter voter intimidation efforts, while traditional and social media should "avoid providing a forum for candidates to declare themselves winners before the electoral process has played itself out, or for the sharing of pernicious disinformation."

The group also called for public statements by both Trump and Democratic presidential candidate Joe Biden, affirming in no uncertain terms that they will not interfere with vote tabulation and will accept the results of the election. Such statements, the ICG said, are the same "simple but effective measure that U.S. officials traditionally have encouraged in foreign states facing a parlous election."

The study notes that given the United States' bloody history and widespread dissatisfaction in the president day over economic and racial injustice and inequality, "at some level, it should not be surprising that the United States now faces the specter of electoral violence."

The country is awash in firearms, has gun homicide levels unmatched by any other high-income country, and is home to a white supremacy movement that, as discussed below, is growing in virulence. Racial injustice, economic inequality and police brutality are chronic sources of tension, which periodically bubbles over into large-scale peaceful demonstrations and, sometimes, civil unrest.

But observers on social media expressed alarm over the ICG's unprecedented report on the United States.

As with the Carter Center, this is the first time the International Crisis Group is covering a U.S. election. To qu… https://t.co/HamyQ7pWAQ
— Mehdi Hasan (@Mehdi Hasan)1603891486.0

For the first time in its 25-year history, the International Crisis Group feels the need to issue a warning of poss… https://t.co/ruN0JzrHXp
— Ayman Mohyeldin (@Ayman Mohyeldin)1603897998.0

"That this superb report by ICG had to be written is a testament to the erosion of U.S. democracy and the persistence of minority rule, of which the current presidency is a malignant symptom," tweeted Adam Shatz, contributing editor at the London Review of Books.